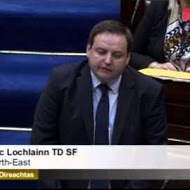 DONEGAL TD Padraig Mac Lochlainn has accused the Taoiseach of cynicism and political opportunism during a Dáil debate on claims the IRA exiled abusers from the North to the Republic.

During the debate Gerry Adams rejected previous claims by Mr Kenny that people had been sent from the North to Donegal.

In his speech during the Dáil debate this evening Deputy Mac Lochlainn highlighted what he alleged was the Taoiseach’s failure to meet families who allege cover up of murder or profound failure of the criminal justice system in this state saying this has hurt victims and their families.

Here’s what Deputy Mac Lochlainn had to say in full:

“There was a profound policing vacuum in the north for many decades. This was not created by Republicans. During the conflict, large sections of the community in the North did not access or trust the criminal justice system.

“And in some cases citizens were victims of state abuse or the police turned a blind eye to abuse.

“We cannot be selective in dealing with the failures to handle allegations of sexual abuse.

“There is no hierarchy of victims. All should have been ensured the protection and support of this state.

“Women prisoners were subjected as a matter of policy to the sexual assault of strip searching.

“The women subjected to this abuse, deserve access to justice and to hold those responsible, those who conducted the assaults and those who sanctioned the policy, to account.

“Throughout the conflict in the north the police and court service were subservient to the objective of combatting republicanism.

“This cannot be discounted as republican propaganda. The state pursued as policy the primacy of gathering intelligence on republicans over that of tackling criminality.

“It has been the experience of many victims that went forward to the RUC that they were more interested in intelligence gathering than dealing with complaints.

“We also are unaware of the number of abusers who were safeguarded from arrest or had charges dropped if they became an asset to the Special Branch or British Army intelligence.

“This was the practice that was in place until the implementation of the Patten Commission. This was the force within a force that operated throughout the conflict.

“Successive Irish governments were aware of this and that was why a new beginning to policing formed a key part of the Good Friday Agreement.

“We cannot be prescriptive or selective as to who is entitled to due process and support. To ignore that reality is to ignore the abuse that went unreported or investigated by the state with the potential that abusers where safeguarded from arrest.

“All victims of abuse at a time of conflict deserve support and access to justice.

“Any proposals to support and provide justice for abuse victims must address the legacy of state forces or be seen to be selective and party politically motivated.

“I understand that there are around 300 serious cases on the desks of An Taoiseach and the Minister for Justice. Most if not all of these cases have been referred to the independent panel of counsel for their review and recommendations.

“Some of these cases are persons or families alleging the cover up of murder and a profound failure of the criminal justice system in this state.

“Despite requests from some of these families for meetings with the Taoiseach, no meetings have been facilitated.

“The Taoiseach has not commented on their cases.

“The Taoiseach has not labelled the accused as guilty.

“The Taoiseach has not set aside any time in this chamber for statements on these matters.

“The Taoiseach protests that he cannot comment on these cases as an independent review process is under way.

“Many of these families have contacted me in recent weeks with the observation that the Taoiseach left aside all of this previous practice to avail of the opportunity to score political points. They are hurt and they are outraged.

“An Taoiseach stands accused of cynicism and political opportunism. I believe him to be guilty on both charges.

“I now wish to outline just a few of these cases.

“Shane Tuohey was from Tullamore, Co. Offaly. He was 23 years old.

“On the 2nd February, 2002, Shane attended a night club. He would never return home. His body was taken from the river Brosna in Clara on the 9th of February, by his brother Edwin after a week long search.

“Shane’s family believe that their son was the victim of a brutal assault that night that led to his death and that his body was subsequently dumped into the river.

“They have attained the services of two forensic pathologists based in the United States. Both of them put Shane’s brain injury down to head trauma. One of the forensic pathologists, Dr Kim Collins states ‘It is my opinion that the manner of death of Shane Tuohey is indeed homicide’.

“Yet a Garda source was quoted after Shane’s body was recovered as stating that ‘foul play was not suspected’.

“Worse still, a member of An Garda Síochána went on the local airwaves to state that Shane Tuohey had gone missing on a number of previous occasions. His family have rejected this statement as entirely untrue.

“The Tuohey family believe that their son and brother was murdered and that some members of An Garda Síochána were involved in a cover up.

“They are devastated by their experience and they have a harrowing story to tell.

“Jim Goonan was found dead in his home in Birr, County Offaly in March 2002. Jim’s brother, Cyril believes that he was murdered despite the advice given by An Garda Síochána to the DPP that his death was not suspicious. They have a serious story to tell.

“On August 2nd, 2011, 23 year old Shane O’ Farrell was killed by a hit and run driver at Carrickmacross, Co Monaghan. A law graduate, Shane had handed in his dissertation for his Master’s Degree in Law at Trinity College, earlier that day. Like Shane Tuohey, he had a full life ahead of him.

“Words cannot describe the devastation Shane’s death has caused to his parents and siblings. His mother told me when I met her that their family are destroyed.

“The driver of the car that killed Shane was a drug addict with 40 previous convictions and was at large because of two suspended sentences imposed on both sides of the border.

“Shane’s family believe that their son and brother was killed by this state because of the incredible litany of failings in our criminal justice system that culminated in the killing of Shane.

“Theirs is also a harrowing story.

“Tomorrow, a delegation of families seeking justice for their deceased relatives will visit Stormont Castle to meet senior politicians from each of the political parties in the North including the DUP, Sinn Fein, the UUP, the SDLP and the Alliance Party.

“The families, who live in this state, including some of the families I have just discussed, have lost loved ones in violent circumstances – in two cases, their own children.

“They have also been unable to get a meeting with Taoiseach Enda Kenny.

“The families will be accompanied by Garda whistleblower John Wilson and journalist Gemma O’Doherty.

“This is the first phase in a new international awareness-raising campaign about cases of alleged Garda wrongdoing which will be taken to the European Parliament and the United Nations, among other institutions, in 2015.

“Will the Taoiseach finally meet these campaigners and these families? Or is there not political opportunity in this for him?”

Earlier in a strongly worded address, Mr Kenny said Sinn Féin and the IRA were guilty of “unholy collusion” in covering up sex abuse.

The Taoiseach said Mairia Cahill’s testimony has been chilling and compelling, consistent and sincere.

He said it was the polar opposite of Sinn Féin’s handling of it.

He said that instead of manning up and doing what real men would have done, she was humiliated and degraded all over again with a Kangaroo court, inflicting on her an extravagant cruelty.

He told the Dáil that Ms Cahill came up against people “who had the delusion and the gall to refer to themselves as Óglaigh na hÉireann”.

Mr Kenny told the Dáil that it is clear that in the case of Ms Cahill, Sinn Féin and the IRA put the institution first.

Mr Adams called again on former IRA volunteers who have any information about abusers being expelled from Northern Ireland to bring that information forward.