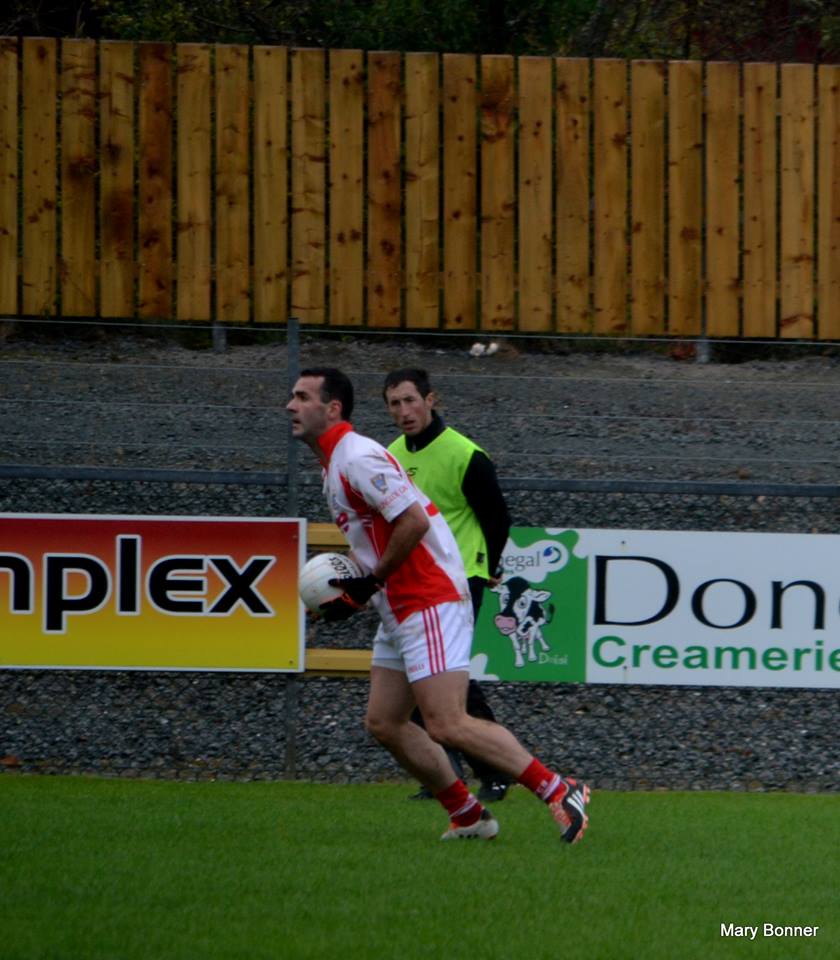 RESERVE CHAMPIONSHIP PREVIEW: DONAL RODGERS HOPING DUNGLOE’S EXPERIENCE CAN GET THEM OVER THE LINE

Dungloe forward Donal Rodgers hopes Dungloe’s experience will be enough to get them over the line in their Donegal Reserve Championship Final Replay against St Eunan’s. Pic by Mary Bonner.

Dungloe wing-half forward Donal Rodgers is hoping Dungloe’s experience will be enough to get them over the line in the Donegal Senior Reserve Championship Final replay against St Eunan’s on Saturday.

Dungloe and St Eunan’s played out an enthralling draw in the first clash a fortnight ago.

However, Rodgers felt the majority of the Dungloe team didn’t perform on the day and that they were lucky to get a replay.

Dungloe led by a point as the game ticked into injury-time, but a Sean Hume free forced a replay, although James Boyle almost nicked it for Dungloe at the death.

Rodgers said the players were ‘gutted’ they let the lead slip, but was honest enough to admit that over the course of match St Eunan’s were the better side.

Rodgers told Donegal Daily, “I don’t think we performed well in the first match, and to be honest on reflection we were probably lucky to get out of there with a draw.

“Now I know we led at the end, and Monty nearly won it for us, but I did feel St Eunan’s were the better side, put it this way if we did win it would’ve been a bit of smash and grab win.

Rodgers felt that some of the younger Dungloe players playing in their first senior final suffered from nerves, and that the more experienced players, himself included didn’t perform.

“There was nerves there, there’s no doubt about that, some of the younger lads were affected by it, but I was disappointed with my own performance and I know some of the other lads felt the same.

“Collectively we just didn’t perform, but I suppose it’s the sign of a good team that we just kept plugging away and stayed in the game.

“Obviously it was the curtain-raiser to the Donegal SFC final and there was a big crowd there and that played a part, but we’ve trained well the last fortnight and we’re just raring to go now.

Rodgers played in the last Dungloe team to win the Senior Reserve title in 2009, his brother Alan, Stephen Doherty, Declan O’Donnell and Mark Boyle are the only surviving members of that team still around.

However, with Brendan McGarvey, Paul McGarvey, Mark Clerkin and James Boyle in their side, Dessie Gallagher’s team have huge experience.

“We’ve boys that have a lot of senior experience and that’s a massive help, especially in games such as Saturday.

“There’s a few of us that know how it feels to win a championship and it’s a brilliant feeling.

“I’m just hoping some of the other lads experience it this weekend.

Rodgers says the return of midfielder Stephen Doherty is a huge boost to the Dungloe side, but said the loss of Jamie Sweeney is a hammer blow.

“He’s a huge player for us, he has great energy and gets through a mountain of work, it’s great to have him back.

“Unfortunately Jamie is still out, it’s a real blow for us as he’s a class player.

“It’s his first year with the reserves, as he’s played senior his whole career and has been an absolutely outstanding player and servant to the club.

“We don’t need any more motivation to win it, but it’d be nice to win it for him too.

“We’re confident and we’ll give it 100%, if we can perform to our capabilities we’ll not be too far away.

RESERVE CHAMPIONSHIP PREVIEW: DONAL RODGERS HOPING DUNGLOE’S EXPERIENCE CAN GET THEM OVER THE LINE was last modified: November 13th, 2014 by Mark Forker