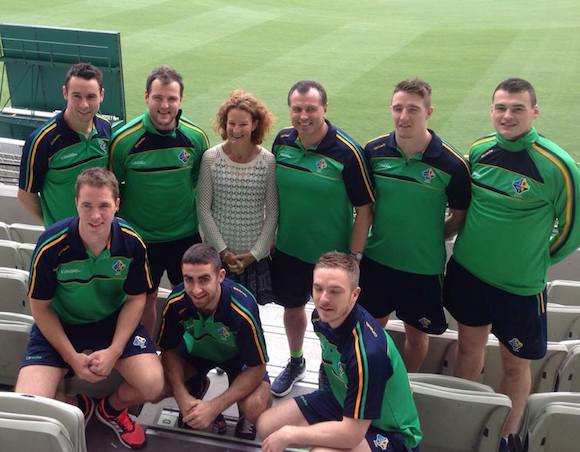 DONEGAL and Ireland International Rules captain Michael Murphy says his team is ready to face Australia in their clans on Sunday.

In a message sent via his Michael Murphy Sports company, the Glenswilly man also spoke of his delighted at meeting legendary Irish athlete Sonia O’Sullivan.

“After a good (and long) flight the whole team landed safely in Oz. It’s been great catching up with everyone. We’re in Melbourne now and busy getting ready for the practice game on Sunday,” says Michael.

“The weather here has been a bit overcast since we landed. It’s been around 14˚c for the last few days, but we’ve heard it’s going to hit the 20’s at the weekend.

“After training yesterday, we visited the historic MCG (Melbourne Cricket Ground) where we met a number of the Australian based Irish at a special function.The MCG hosts both AFL and cricket matches and has a capacity of just over 100,000, making it the 11th biggest stadium in the world.

“We also had the great pleasure of bumping into former Irish athlete and Olympic medalist Sonia O’Sullivan who now lives in Melbourne. The whole group is really looking forward to taking on the Australian Rules team now and our focus is on getting the right result.”