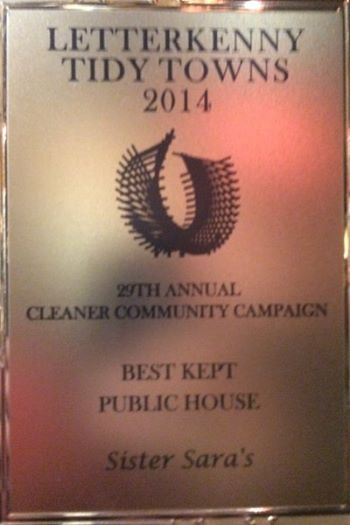 The on-going success of Sister Sara’s continued this week when they were crowned by the Tidy Towns Cleaner Community Award for having the Best Kept Public House in Letterkenny.

Sister Sara’s has been an overwhelming success since they re-opened under new management earlier this year.

Every weekend a top-class line-up of entertainment is provided at Sister Sara’s and it is firmly re-established itself as the No.1 super-pub in Letterkenny.

All the hard work by management and staff is paying off come and that’s reflected not only in the crowds descending on the venue every weekend but also by this award.

Management at Sister Sara’s told Donegal Daily, “We are absolutely delighted to have been presented with the 2014 Tidy Towns Cleaner Community Award for Best Kept Public House at this evenings awards ceremony.

“It’s a testament to the hard work, effort and diligence of our staff, and it’s nice to be recognized. We’re all absolutely delighted with the award.

With the big Euro 2016 qualifier tonight between Ireland and Scotland Sister Sara’s is the perfect venue for you to watch the game in.

With great drink promotions throughout, and with a number of HD Plasma TV’s available to watch the game on, it’s the only venue to enjoy the match.

Also everybody at Sister Sara’s would like to wish Maxi Curran and the St Eunan’s team all the best in their Ulster SFC Semi-final on Sunday.