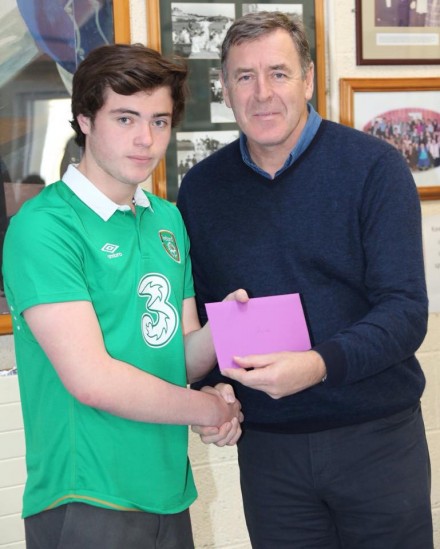 Packie Bonner making a presentation to James Boyle who’s been selected to represent Ireland at the Football for all World cup in Mexico.

Packie talks to James about that save at Italia 90.

A Donegal teenager has been selected to represent Ireland at the Football for all World Cup in Mexico next year.

James Boyle, 17, is from Saltpans in Dungloe and is a fifth year student at the Rosses Community School.

He found out earlier this week that he’d been selected to represent Ireland at the World Cup in Mexico.

James comes from a family steeped in sporting tradition, and despite being an amputee that hasn’t stopped this remarkable young man from making his impact on the game he loves.

As a young child James was cruelly forced to have his leg amputated, however he’s a supremely gifted player and is noted for his physical strength.

He’s a huge Arsenal fan, and is absolutely over the moon to have been selected on the Ireland team to play at the World Cup.

James will now join Shay Given and Packie Bonner as a select band of Donegal men to play at a World Cup.

Former Celtic FC and Republic of Ireland goalkeeping legend Packie Bonner was the special guest at a presentation made to James on behalf of all the staff and students at the RCS who are very proud of his outstanding achievements.

Packie knows all about representing his country at a World Cup so we’re sure his advice was well heeded by James.

Well done to James on his wonderful achievement and we wish him all the best in Mexico.

DONEGAL TEENAGER SELECTED TO REPRESENT IRELAND AT FOOTBALL FOR ALL WORLD CUP IN MEXICO was last modified: November 15th, 2014 by Mark Forker