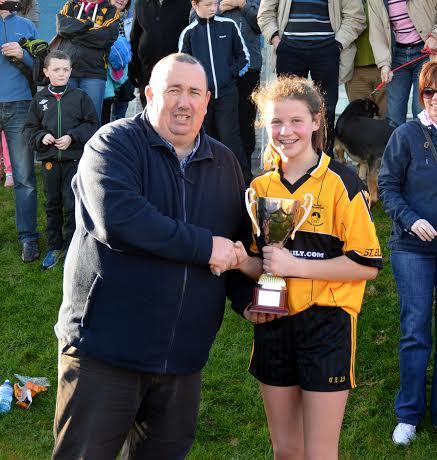 MORE than 300 people turned up today for a festival of ladies football as the 2014 U13 County Championship reached its climax at superb facilities at Coláiste Ailigh in Letterkenny.

Three county titles were up for grabs; and the huge number of spectators who filed through the gates of the county’s newest secondary school was a testament to the future of ladies football in the county.

First match of the day saw the County C Championship decider between MacCumhaills and Glenswilly.

The Twin Towns girls just had a wee bit too much for the girls from the Glen, but Glenswilly can take great heart from the growing number of young girls taking up the sport. A great achievement for MacCumhaills and an equally good achievement for Glenswilly in reaching the county final.

The County B Championship Final between Naomh Muire and Buncrana was not for the faint-hearted and was a cracking end-to-end game.

In the end Buncrana won it by a single point. Great credit again to mentors and players in both clubs who are working so hard for the ladies game at this level. Many congratulations to Buncrana who took the B Championship trophy home to Inishowen tonight.

The A County Championship final was a clash between two sides who drew in the league rounds – Moville and St Eunan’s.

St Eunan’s started brightly and went in at half time nine points to the good; Moville came storming back in the second half and began to close the gap.

But the Eunan’s girls kept pushing forward and with goals from Aoife McCarron (2), Claire Doherty (2) Niamh Walsh and Niamh Harkin the Letterkenny girls maintained the nine point lead to the end.

The Moville club – rapidly becoming the benchmark for underage girls football in the county – can be proud of reaching yet another county final and there should be no disappointment among their players who gave their all today, with some of them already having U16 and Minor titles to their names this year.

So commiserations to the runners-up today: Glenswilly, Naomh Muire and Moville.

And congratulations to: MacCumhaills, Buncrana and St Eunan’s.

County A U13 Champions St Eunan’s