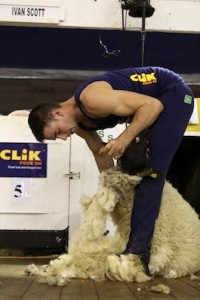 DONEGAL’S World record lambshearer Ivan Scott scored his biggest competition win outside Ireland and the UK with a stunning upset victory in the New Zealand Corriedale Championships final at the Canterbury Show in Christchurch yesterday.

It was a massive leap for the 33-year-old from Kilmacrennan who hadn’t won a competition in New Zealand since the 2008 Northern A and P Show in Rangiora.

Having shorn in New Zealand every summer since he was 19, Scott has, however, twice broken the World eighth-hour strongwool lambshearing record.

He is the current holder with 744, shorn when he claimed the record back from Hawke’s Bay shearer and former World and Golden Shears champion Cam Ferguson in January 2012 at Opepe Station, just east of Taupo.

His win yesterday was based on the quality of his 10 sheep in the pen judging, where he was more than 4pts better than anyone else in the six-man final.

His ultimate winning margin of 1.299pts was all that stood between 47-year-old defending champion Rakaia shearer Tony Coster and a unique treble on a day when Coster was presented with a small trophy marking his acclaim as a Master Shearer.

SHEARER CLASS FOR DONEGAL’S IVAN SCOTT AS HE STUNS NEW ZEALAND WITH ANOTHER VICTORY was last modified: November 15th, 2014 by John2