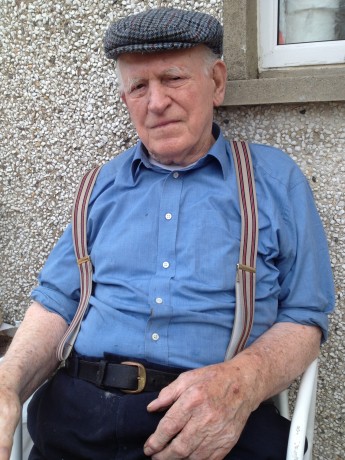 Patrick Gallagher has credited boiled eggs and a lorry-load of tea everyday as the main reason he reached his 100th birthday earlier this week.

Patrick known locally as Pat ‘Den’ was born in Pettigo in 1914, just a few days after the outbreak of the First World War.

Patrick has seen many changes over the last one-hundred years, Ireland gained independence, another World War broke out, America put a man on the moon, let’s just put it this way, he’s seen a lot of changes.

However, one thing that didn’t change was Patrick’s staple diet of boiled eggs and lots of tea.

An extremely hard working man his entire life, Patrick credits his longevity to a combination of hard work which ensured he remained fit and an healthy diet.

Patrick has resided in Aghyaran for the majority of his life, he moved there when he married Bridget McGlinchey and they raised three sons John, Pat and Dinny.

Patrick has retained his sense of humour and still enjoys nothing more than a smoke on his pipe, a small nip of Powers and the card game ‘25’ with friends and family.

A deeply religious man Patrick remains a man of strong faith and his gresatest love is his family.

His grandson Paul Gallagher explained: “My grandparents lived on the farm working with cows, sheep, hens and in later years pigs.

“Granda was always a great grafter and in the bog, no stranger to slicing off a few peats with the spade and keeping the barrows filled.

““He never drove and didn’t have a tractor on the farm until the 1970’s when his youngest son Dinny returned from working in England.”

His mind still as sharp as the proverbial pin, Pat loves to recall his earlier years with great stories including tales of poitín making.

His grandson Paul added: “Granda has his routine. He gets up in the morning, has his cigarette and heads to his chair in the kitchen where he says his prayers. “His daily breakfast is a boiled egg and a mug of tea.

“Up until lately he also used to carry the turf from the shed to keep the range going throughout the day, and if the axe wasn’t hidden he’s been known to split sticks!

“During the day he keeps his trusty pipe on the go. He has been smoking since he was 16 and seems his most content when he has the pipe fired up.”

Paul laughed, “His drink of choice is Powers and water but not too much… water that is!”