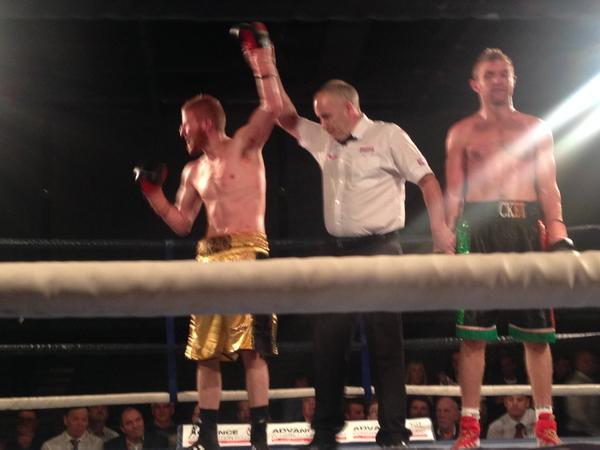 The referee raises the hand of Brad Botham as a disgusted Shaun Mc Shane looks on.

However, Mc Shane was left incensed by the decision in a fight in which many in the crowd felt he controlled throughout.

He was left questioning the politics involved in professional boxing, but vowed he would not be sickened out of the sport he loves.

Mc Shane was supposed to face Bulgarian fighter Radoslav Mitev, but he had to withdraw late-on due to an injury.

Brad Botham stepped in to replace Mitev and looked in trouble early-on as Mc Shane stamped his class all over the fight.

Botham did work his way into the fight and turned the latter stages of the fight into a scrappy affair.

However, there was late drama and anger among Mc Shane’s travelling support when the judges awarded a narrow one-point win to Botham.

Prospect Boxing owner Paul Graham reiterated the view that Mc Shane had been robbed, and even alluded to the fact that boxing politics was at play.

Graham said, “I was disappointed with Shaun’s fight as I thought he deserved – at the very least – a draw.

“I don’t know if it could be that the with other two guys from Cumbria [Keleher and Warren] the scores went against them so maybe they were trying to even the balance.

“Victor scores it as he sees it, I didn’t see it the same way as him, so I’ll just need to bow to his experience. I thought that was a winnable fight for him there. I don’t know what happened but we’ll bounce back.

Mc Shane had earned a tough draw in his last outing against the Cumbrian fighter John Greene, and the same judges that night awarded a draw in that particular fight.

Graham and Mc Shane feel that with the fight so close again, rather than award a draw, they opted to side with Botham.

A disappointed Mc Shane took to his Facebook timeline to express his anger and frustration with the decision, but vowed he’d be back.

Mc Shane said, “If they think I’ll be sickened out of it they have another thing coming, long road without a turn.

Mc Shane is hoping to get back into the ring in the New Year.