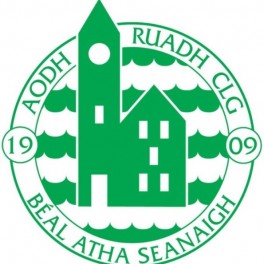 Aodh Ruadh’s bid for promotion to division two was dashed with a defeat 1-9 to 2-7 to Glenfin in Convoy.

The better of the sides across the course of the game, this was a very difficult defeat for Aodh Ruadh to take.

Aodh Ruadh can be proud of their performance in this game where their battling spirit and determination to play the game the right way did them great credit. It is profoundly disappointing to see this promising group denied promotion in this manner. From one to 15 and right down through the bench they tried their hearts out for the cause. They do not deserve to be playing their football in division three next year, but hopefully they will draw strength from this experience and come back stronger and wiser. Many thanks to Maurice McLaughlin, Shane Ward, Greg Sweeney, Anthony Donagher and everyone who helped with the team across the year and thanks also to everyone who lined out in the senior jersey this year for their efforts. After the great strides made this year hope is strong that 2015 will be the year of the breakthrough. We have a full match report and pictures from the game up on aodhruadh.org.

The PJ Roper Memorial under 16 tournament took place on Saturday 15th November with four teams taking part; Aodh Ruadh, Fermanagh champions Derrygonnelly, Leitrim champions Fenagh and Dromore from Tyrone. There was great weather for the time of year which was a God-send and made the day all the more enjoyable. In the end Aodh Ruadh had enough hunger and football skill to put the final game beyond a quality Dromore side. As often happens in these tournaments the highlights of the day can come from impact subs. Odhran Kennedy’s superb goal on his u-16 debut stand out as the biggest cheer of the day. Another under 16 debutante Mark Gallagher in goals has matured quickly into a great shot stopper who also found his players consistently with quality kick-outs. James Sheerin scoring 1-1 against Derrygonnelly and Paddy McCaffrey’s skill and determination in defence left them both in the running for Young Player of the Tournament. Oisín Rooney dominated midfield in every game and Captain Ryan McKenna literally ran himself into the ground with a work-rate that is exemplary for anyone in green and white. Conall Sweeny, Michael McKenna and Gareth Sheerin scored lovely points and contributed well throughout the day while Jason Granaghan and Dan Warnock produced some rock-solid defending to finish out games and ensure Aodh Ruadh ended on top of the pile. There was no big crowd of supporters on the day but it was nonetheless a great way to end the year for the under 16s. We are very grateful to the three teams who travelled to Ballyshannon for the competition, to Greg McGrory and Brian Roper for volunteering their time as referees, to Johnny Gallagher who spent the whole afternoon there making sure that everything ran smoothly, to the Roper family and to Cafe Beag and all the family members who were kind enough to provide sandwiches, buns and refreshments for everyone who came. We have received fantastic support for this team during the year from Annette Granaghan who washed the jerseys all year in Persil and Holy Water. Thanks to all parents who provided transport to the games and contributed to our fund-raising efforts, from Marlboro house, Donegal Adventure Centre, the O’Neill Family, East Port and McMullin Solicitors. The team management would like to sincerely thank the club, the players families and all those who sponsored us for all you have done this year.

The Bord na nÓg AGM will be held shortly. Anyone interested in getting involved in coaching or committee please contact Shane Ward, Shane Toolan or Tracey Flood.

Many thanks to those who have been supporting us with the Lucozade Kit Out Project. We are not asking people to start buying Lucozade, but could anyone who does drink it please note the code on the bottle under the wrapper and pass it to Tracey Flood. Codes will be added to our account and we get some free kit. Please pass this on to your friends or anyone you know that drinks Lucozade and ask them to keep codes for the club. The more codes we collect the more gear we can get.

Well done to Creevy National School who won the Cumann na mBunscoil county final against Tooban National School last Tuesday in the Centre of Excellence in Convoy. In a great display the lads captured the title for the first time ever on a 4-7 to 2-0 score line. It was a great display by the whole squad which saw them run out convincing winners against the Inishowen school who are the feeder club for the famed Burt club. The school had a squad of 23 players and all of them got game time in the match. The majority of the squad play hurling with Aodh Ruadh, but there are a number who haven’t played with the club yet and we hope to see them start training with in March 2015. The history making squad returned to a great welcome at the school from staff and pupils. Thanks to Principal Aoibhínn Kelly, and teachers Brendan Boyle and Ciaran Slevin for their help and support in preparing the team for this competition.

Aodh Ruadh Juvenile Hurling Committee’s AGM takes place in Aras Aoidh Ruaidh on Thursday 27th November at 8pm. We will be reviewing 2014 and planning ahead for 2015, we invite everyone with an interest in underage hurling in Aodh Ruadh to attend this meeting, don’t worry nobody will be forced into taking a ‘job’.

Over recent weeks significant progress has been made on constructing a 650 yard long Fitness Trail around the perimeter of Páirc Aodh Ruaidh. This was part of the original plan adopted by the club in 2006, but which has moved slowly due to funding shortages. The Fitness Trail will be finished to a high standard and will incorporate a five lane 100 metre sprint section with a run-off area. This project is being advanced in parallel with the provision of a rebound wall for youth hurling, football and handball coaching. So far all of the funding for these important Aodh Ruadh developments has been raised by the Club’s Park/Development Committee with the Summer Family fund-raiser being an important contributor. Thanks again to all who helped. A further fund-raiser to assist with completing this work will be announced in next week’s club notes. If current progress can be maintained and if club members row-in behind the fund-raising efforts, there is every chance that the Fitness Trail can be brought into use over the Christmas period. Anyone interested in helping with these efforts should contact Tom Daly, Conal Gallagher or David McLoone.

There will be an opportunity to try on youth and adult sizes of our navy blue soft shell jacket this Friday 21st November, from 6pm to 7pm. With Christmas coming up they are the perfect stocking filler for your GAA mad youngsters. We now have three youth sizes available. Ages 7-8 priced €40; ages 9-10 priced €40; and ages 11-12 priced €45. All jackets will have the Aodh Ruadh and GAA crests, plus the child’s initials on the sleeve. We are also able to order Ladies soft shell jackets with pink Aodh Ruadh crest and GAA logo. We are still selling adult jackets and these would make an ideal present for club members returning from foreign lands for the festive period. Orders for all jackets will need to be in by the second week of November at the latest to ensure Christmas delivery. You can check out samples of the jacket on aodhruadh.org. For further details call Chris on 0868813553.

The Aodh Ruadh AGM will take place on Sunday 7th December at 3pm in Aras Aoidh Ruaidh. Nomination papers have now been circulated to all adult members whose e-mail details are on the online registration system. For those who did not receive nomination papers, they are also available to print and download from aodhruadh.org. The deadline for receipt of nominations is midnight Friday, 28th November. Anyone who requires nomination papers to be posted to them is asked to contact Emma Gaughan on 0863039610, to make arrangements. The deadline for receipt of motions passed at midnight, Monday, 17th November.

The €400 jackpot was shared by Gerry Quigley, Dunkineely and Sharon Connolly, Kinlough. Bingo this Friday returns to the Abbey Centre at 9pm, books priced at €10 full book, €5 half book. The snowball prize has returned for winter, and stands at €250 on 46 numbers or less.

The lotto team for McCosker’s Centra this Saturday is: BORD NA NÓG.

The lotto team for Kernan’s Spar this Saturday is: RESERVE FOOTBALLERS.

You can receive the club notes by e-mail every Tuesday morning. To subscribe, enter your details on the website, www.aodhruadh.org, or e-mail your request to info@aodhruadh.org.