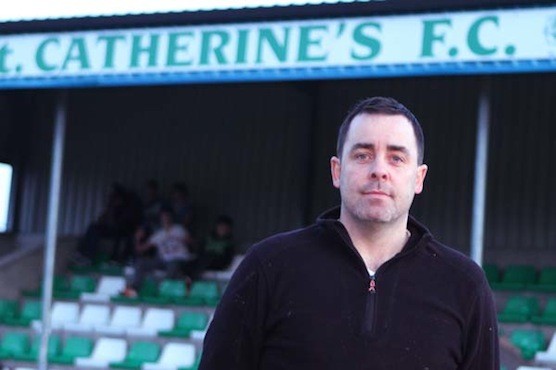 BRIAN ‘DINKY’ DORRIAN CONFIDENT AHEAD OF CLASH WITH RIVALS INISHOWEN

Brian “Dinky” Dorrian confident his side can get a positive result against Inishowen tonight.

Manager of the Donegal League representative side Brian ‘Dinky’ Dorrian is quietly confident ahead of his side’s clash against their Inishowen counter-parts this evening.

Donegal got their Oscar Traynor campaign off to a winning start last month when they defeated a Cavan/Monaghan select side and travel to Maginn Park full of confidence.

Dorrian has a number of injury worries with Jason Noctor, Gary Crossan and Benny McLaughlin all struggling to be fit.

White is playing for the Irish Army side in the European Championships in France next week and wasn’t released for tonight’s fixture.

Dorrian has called up Milford’s Caolan McGettigan to deputize for White.

O’Rourke is at college in Galway and can’t make it back for the match due to course work, while Friel has been re-located with work and is out of the county for the week.

Dorrian told Donegal Daily, “Jason is a big, big doubt for the game, he’s got tendonitis in the knee and it’s touch and go whether he’ll make it.

“He’s a huge player for us, and if he’s misses out, there’s no doubt it’s a blow, but we’ve got a strong squad.

“Benny McLaughlin has the flu, but I’m hoping he’ll be OK, while Gary Crossan has a dead leg from the weekend and is really struggling to make it.

“We tried to get Lee White, but the army wouldn’t release him for the game, while Shane O’Rourke and Paul Friel can’t get back for the game due to other commitments.

Dorrian believes Inishowen have set the standard in this competition over the last number of years and consistently produced top sides.

Donegal’s record against Inishowen in this competition is very poor, and they haven’t registered a win against their rivals in over a decade.

However, Dorrian feels that record has to end sometime, and tonight could be the perfect opportunity to do it.

“If we were more clinical, we would’ve been out of sight, but we weren’t and when they got scored late-on it set-up a nervy finish.

“Inishowen are a top side, and we’re under no illusions as to how difficult a game it will be tonight, but we’re confident we can go there and get a result.

“They lost their opener, so all the pressure is on them, they need a result, but as I’ve said, we’ve prepared properly for this and we’ve a good squad.

“We’ve a pretty awful record against them, and I don’t think we’ve beaten them in over ten years, that’s something we want to put right, and it’s something we’re capable of doing.

Former Finn Harps stars Matthew Crossan and Gary Merritt are the stand-out names for Donegal and Dorrian will hope the duo can be as influential as they were in their last outing a month ago.

The game is at the superb Maginn Park, and the immaculate playing surface should suit two teams who like to play a good brand of football.

The match kicks-off at 7.30pm in what is both sides second match in the Oscar Traynor group stage.