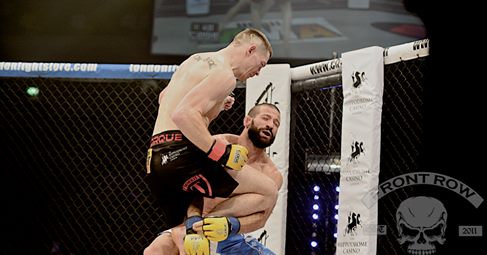 Duffy delivers the devastating KO to French opponent Julien Boussuge in the opening round of their fight on Saturday night.

A leading UFC commentator has claimed the UFC should sign Joseph Duffy and set-up a rematch with Conor McGregor.

Duffy is the last opponent to inflict defeat on McGregor who is now one of the biggest names in the UFC, and is the darling of president Dana White.

Duffy defeated McGregor with an arm-triangle choke in a stunning opening round stoppage back in 2010.

Since returning to MMA in August after a three-year lay-off Duffy has been hugely impressive.

He defeated Damien Lapilus in front of a passionate home support at The Helix in Dublin in what was a dream return for the Burtonport fighter.

Last Saturday in London, on the Cage Warriors 74 card Duffy delivered a brutal KO inside the opening thirty seconds.

A devastating blow with his knee to the face of  French opponent Julien Boussuge ended the fight.

The KO has seen MMA fight fans and UFC commentators make claims that the UFC should sign up Duffy.

He has a 11-1 record and has another notable scalp in the form of Norman Parke.

One thing is for sure, Duffy is back and he isn’t going away this time.

Duffy is here to stay and looks like a man on a mission, a man that looks destined to take on the best in the world.

CALLS FOR UFC TO SIGN UP JOSEPH DUFFY AND SET-UP REMATCH WITH CONOR MCGREGOR was last modified: November 19th, 2014 by Mark Forker