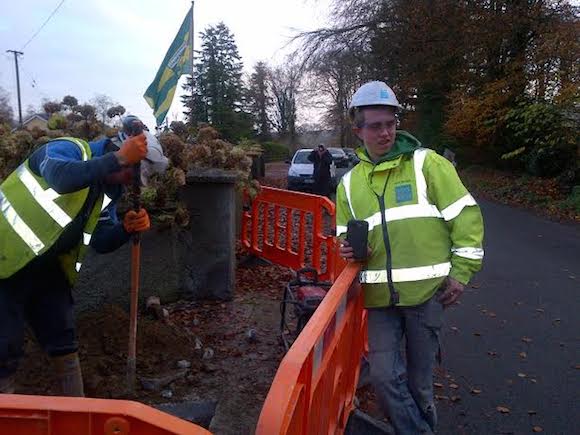 One worker filmed a number of protestors in Convoy today as three colleagues continued to dig a hole for a water meter despite a request from the house owner.

The resident was at work and unable to personally stop the concrete on his drive being dug up.

A request from a neighbour for the work to stop was ignored.

One of the workmen told the neighbour: “This is public property and we have permission to dig here.”

The neighbour, who doesn’t object to water charges, said he had been asked to pass on the message.

However the worker wearing dark sunglasses continued to dig into the concrete in the driveway of the house.

There was no garda presence in the area and the protest was peaceful.

A number of people from Drumkeen and Letterkenny were in the area at the time but the contractors refused to engage in conversation with them.

The Government has announced flat rate water charges of €160 for families until 2018 but that is unlikely to quell the public anger over water charges.

Chairperson of Donegal Right2Water Charlie Mc Dyer said that after the huge success of the Letterkenny demonstration on Nov 1st last, people are really fired up about the issue.

She said: “I received many calls and messages asking when the next protest was on. This shows a real hunger among the public for change, along with a very real belief that people power is working.

“November 29th is significant as it is the extended deadline date for application packs and also an opportunity for people who may have missed the previous demo, to take to the streets and let their voices be heard.

“Right2Water believe that the recent backtracking by the Government has now been replaced with a few concessions but also threats that may scare people into paying the hated water charges, even though many cannot afford to do so.”

Speaking in the Dail a short time ago, Minister Alan Kelly announced the maximum charge will be €160.

Other key parts of the u-turn include:

The capped charges will be €160 for single adult households and €260 for all other households until the end of 2018. There will be specific legislative provision to allow for capped charges to continue to be set from 2019 onwards.

All eligible households will receive a Water Conservation Grant of €100 per year; This means that the net cost to single adult households will be €60; For other households it will be no more than €160.

Pay half if only getting water in or out:

Households with either a water supply only or sewage only service will pay 50% of the new rates;

Metered usage can bring charges below the relevant cap. The children’s allowance remains at 21,000 litres per annum and will apply to all persons resident in a property aged under 18 irrespective of whether the child qualifies for Child Benefit, meaning children will continue to go free;

For metered bills, the charge for water in/out is reduced to €3.70 per 1,000 litres – almost 25% lower than the previous subsidised rate;

The system is based on self-declaration and appropriate audit.

PPS Numbers will not be required for registration.

The starting date for domestic water charging is being pushed back to 1 January 2015, with first bills to issue from April 2015;

In cases where water is unfit for human consumption, the affected customers will receive a 100% discount on the costs of their drinking water supply for the duration of the restriction. Therefore, customers will only be required to pay for the sewage treatment.