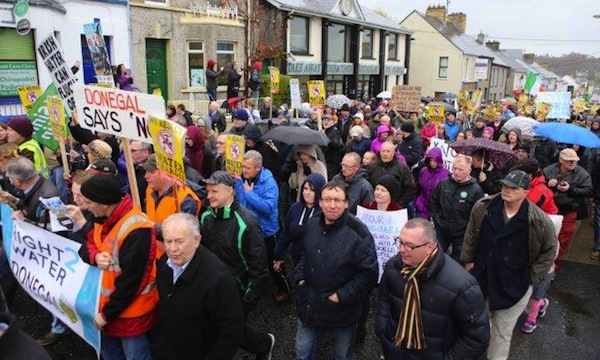 The Donegal branch of the Right2Water group has revealed it will hold a day of protest against the proposed water charges at locations across Donegal on November 29th.

Thousands of people took to the streets of Letterkenny, Lifford and Ballyshannon recently to voice their disproval at water charges.

Now further protests have been arranged for a number of locations including Gaoth Dobhair, Carndonagh, Letterkenny, Twin Towns and Castelfin.

It comes as the people of Drumkeen claim victory against Irish Water after contractors failed to return today to fit meters after residents there protested against their presence in the village yesterday.

Chairperson of Donegal Right2Water Charlie Mc Dyer explains that after the huge success of the Letterkenny demonstration on Nov 1st last, people are really fired up about the issue.

She said “I recieved many calls and messages asking when the next protest was on. This shows a real hunger among the public for change, along with a very real belief that people power is working.

“November 29th is significant as it is the extended deadline date for application packs and also an opportunity for people who may have missed the previous demo, to take to the streets and let their voices be heard.

“Right2Water believe that the recent backtracking by the Government has now been replaced with a few concessions but also threats that may scare people into paying the hated water charges, even though many cannot afford to do so.”

She added that recent scuffles between protestors down the country and the Gardai have been splashed all over mainstream media and it appears that there are efforts afoot to paint protestors in a bad light.

R2W Secretary Philip Mc Fadden said it is unfortunate that there have been a few incidents but that is to be expected.

“Afterall the Government has continuously repeated that it is listening to people when in reality this couldnt be further from the truth. People are frustrated with the lies, the spin and the outright refusal of elected officials to listen to what is being roared at them by the Nation. Donegal has a proud tradition of peaceful protests and I am confident this tradition will continue,” he said.

He said recent votes by County Councils show many are in favour of abolishing Irish Water and the Right2Water group welcomes this as another step in the right direction.

“While the Government admits it has handled the situation badly it still holds firm in its endeavours to charge people for water. This is why more protests are being called, and not just in Donegal. Daily across Ireland, protests are occuring in towns and villages by a Nation that has had enough.”

Right2Water is encouraging people to take to the streets again on the 29th. Demos are being held in the following locations

THOUSANDS EXPECTED TO VOICE ANGER AS DAY OF WATER PROTESTS PLANNED FOR ACROSS DONEGAL was last modified: November 19th, 2014 by Stephen Maguire