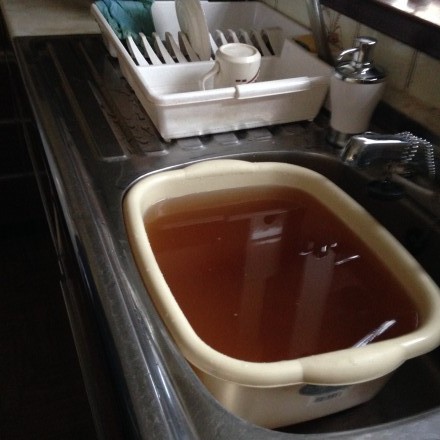 WATER OUTRAGE: WOULD YOU EVEN DRINK THIS, LET ALONE PAY FOR IT?

This is the disgusting and vile state of the drinking water in Hillhead, Castlefin.

These pictures were taken by Sally Herron who is clearly unable to even drink the water coming from the taps in her home, yet this Irish Government still expects her to pay for this.

According to Sally the residents of Hillhead, Castlefin have been subjected to this water quality on and off since 1980!

Because of the chronic state of the water supply all the residents in the area are forced to buy their own drinking water.

Sally told Donegal Daily, “This has been going on since 1980, off and on, it’s an absolute disgrace.

“For the last number of years we’ve all been forced to buy our own drinking water as our appeals to get the issue resolved over the years have fallen on deaf ears.

“The problem we’ve been told is old iron pipes from Lough Mourne, the pipes lead all the way down and have had numerous bursts over the years.

Sally says the fact Irish Water still plan to install meters in the area despite the horrific state of the water quality indicates how out of touch the current Government really are.

Sally says the water is contaminated and is undrinkable, she says locals believe the reason the water is discoloured is because Lough Mourne is full of dead animals.

Sally added, “We’ve been told Lough Mourne is full of dead animals, and there is no fence around it.

“When there is a burst we have no water for three days, and when it starts again we get an oily smell through the kitchen sink.

“We rarely have water at all in the summer, and when we phone we’re told it’s needed for local businesses.

“A local plumber told me there is no point installing new metres onto old pipes, what we urgently need is new pipes laid first.

“But that’s not going to happen, all there interested in is getting water meters installed and making sure they get their annual fee.

“They don’t care that the water is undrinkable, they only care about money, it’s an absolute disgrace.

“They’ve another thing coming if they think we’re going to pay for this, it just isn’t going to happen.”

WATER OUTRAGE: WOULD YOU EVEN DRINK THIS, LET ALONE PAY FOR IT? was last modified: November 20th, 2014 by Mark Forker