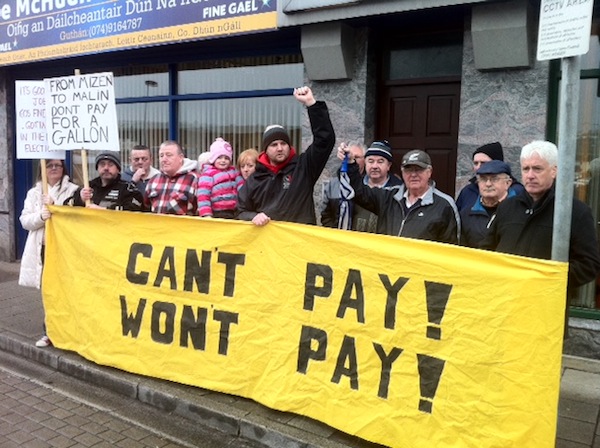 Junior Minister Joe McHugh has met with protestors outside his constituency offices in Letterkenny and told them “I have no problem with you protesting.”

The group of approximately 12 protestors from the Can’t Pay Won’t Pay Group started their protest just after noon and plan to make it last 24 hours.

Minister McHugh met with the protestors outside his offices at Lower Main Street and discussions about the water charges were very cordial.

Passing motorists sounded their horns as the protesters bedded in for the marathon protest with plans for musicians to plays songs on the street later.

One of the protestors, Independent county councillor Micheal Mac Giolla Easbuig, said he had personally no protest with Minister McHugh.

He told Donegal Daily “This will be a peaceful protest and people will come and go throughout the day and we will make it last 24 hours.

“We simply wanted to send a message to the Minister and to the Government that despite the climb-down by the Government, many will still not the pay this unjust tax,” he said.

Meanwhile Minister McHugh said he had no problem with people protesting outside his office.

He admitted his Government had underestimated the feeling of the public and had admitted their mistake.

“We have made massive mistakes as a Government and we tried to be too ambitious. We tried to do something in eighteen months that other countries have taken a number of years to do.

“The Government has put up its hands and there were issues there surrounding privacy, etc but I think the big issue surrounding affordability has been addressed.

“I still don’t think there is any way that we can get this issue one hundred per cent right,” he admitted.

Minister McHugh added that he had absolutely no problem with today’s protest outside his office.

“I have gone out and spoken to the people here today and my clinics continue as normal.

“I appreciate people’s right to protest and they have been more than courteous to me today,” he said.

MINISTER ADMITS THERE HAS BEEN A ‘SYSTEMS BREAKDOWN’ AS HE MEETS WITH WATER CHARGE PROTESTORS was last modified: November 21st, 2014 by Stephen Maguire