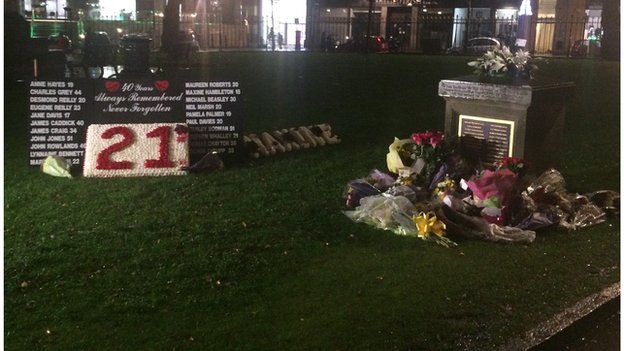 A LARGE crowd gathered in Birmingham, England, last night to mark 40 years since the pub bombings in the city which left 21 people dead.

Among those to die in the IRA attacks were Eugene Reilly, 23 and his brother Desmond who was 21.

Their parents were from County Donegal and relatives from here travelled to England for the memorial.

Julie Hambleton, whose then 18-year-old sister Maxine was killed in the bombings, said it was of utmost importance the victims were “never forgotten”.

But she also asked for national eyes to be focused on their campaign for truth and justice.

Ms Hambleton said: “It was a fantastic evening. People came from as far away as Donegal, Scotland and Cornwall to remember their loved ones.

“They were soaking, dripping wet and every single one of them thanked us for what we are doing and asked us to continue. One woman who lost a friend cried in my arms and said she could not thank me enough.

“Innocent people were slain for no reason and no-one is looking for the murderers,” she said. “We need the country to get behind us. None of us want to be on the news, talking about this, when we should be allowed to grieve, but we get no help from the Government.

“It is a means to an end, to put pressure on the establishment.”

Six men convicted of carrying out the bombings – the Birmingham Six – were freed after it emerged they had been framed by West Midlands Police.

In 1994 the Reillys’ mother Bridget told of how she was discriminated against in the years after her own sons’ murders because of her Irish accent.