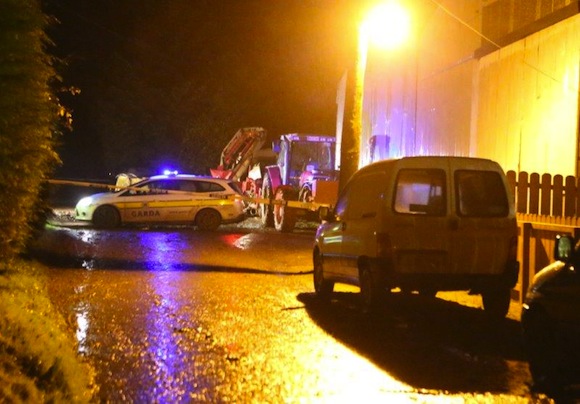 HUGE SADNESS AT DEATHS OF LIFELONG FRIENDS IN TRAGIC ACCIDENT

The scene of last night’s tragic accident in Killygordon which claimed the lives of two men. Pic by North West Newspics.

There has been a huge outpouring of grief across Donegal following last night’s tragic incident in which two men lost their lives following a freak accident.

The two men, both aged 52, were life-long friends Kevin Woods and Seamus Hegarty, both from the Raphoe area.

The men were working to change a tyre on a tractor at a farm at Monellan, Crossroads, Killygordon when the tyre is believed to have exploded.

The explosion hit the men and they both died instantly at the scene.

Both men have been described as hard-working and decent men who both came from hugely-respected and well-known families.

Mr Hegarty was a married father of four children from Cloughfin, between Raphoe and Lifford while Mr Woods was a single man from Crossroads, Killygordon.

Relatives and friends of the men rushed to the scene of the accident which happened just after 6pm.

Emergencies services also attended the scene, with the area now cordoned off by Gardai.

It is understood the men had taken land and were growing potatoes in the area.

The Health and Safety Authority is expected to send officials to the scene this morning.

The deaths have caused widespread anguish amongst the close-knit community. The dead men were popular locally.

He said the area is still coming to terms with such a devastating double loss of life.

“Everyone is completely numb with shock with such a tragic double loss of life. I knew both men and they were hard-working and honest men.

“They both come very well-known and respected families and out thoughts and prayers are wit them at this tragic and sad time.

“Donegal has had more than its fair share of tragedy this year and coming so close to Christmas this is even more heartbreaking.

“We are no strangers to farm accidents in Donegal but a double loss of life is just devastating. Our thoughts and prayers are with the men’s families at this time,” he said.

Local priest Fr Patrick Atkinson was attending a wedding when he was informed of the tragedy.

He attended the scene last night.

A number of relatives last night gathered at the scene of the incident as two hearses arrived to remove the bodies of both men to be taken to Letterkenny General Hospital.

Post mortems are due to take place on both men today.

The staff of Donegal Daily would like to express their sympathy to both the Hegarty and Woods families following their loss.