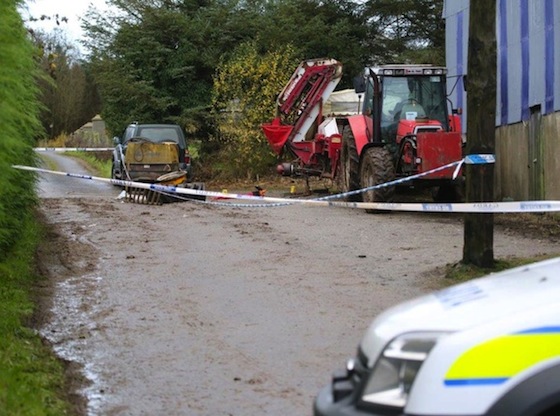 PEOPLE ARE JUST LOST FOR WORDS OVER TRAGIC DEATHS – PRIEST

The scene of the double tragedy which claimed he lives of two farmers. Pic by Northwest News Pics.

A priest has described how a community is struggling to cope with the deaths of two farmers who grew up together and perished together following a tragic accident in Killygordon.

Life-long friends Seamus Hegarty and Kevin Woods, both 52, died when a tractor wheel exploded while they were fitting it on Friday evening at Monellan, Crossroads.

Both farmers were killed instantly.

Fr Edward Kilpatrick, of St Patrick’s Church in Murlog, Lifford, said it was even more poignant that having spend their lives together, both men died together.

Fr Kilpatrick spent today with both families and said how people could simply not find the words to describe the utter sadness being felt by everyone.

“Both men grew up together. They went to school together, worked together and had the same manner in that they were both hard-working, modest and quiet men.

“They were decent, upright men who went about their work on a daily basis.

“The fact that they lived most of their lives together and then died together is what the community here is finding it most difficult to come to terms with,” he told Donegal Daily.

Investigators have confirmed that an exploding tractor tyre killed two life-long friends in a tragic accident in Co Donegal on Friday evening.

A team from the Health and Safety Authority were on the scene of the tragedy at Monellan, Killygordon yesterday.

A large mobile compressor and tractor wheel could be seen at the site of the accident which claimed the lives of the men.

The scene showed how a tyre had been removed from a tractor as the farmers prepared to put a new one on before the tragedy occurred.

Both farmers were killed instantly following the incident which happened just after 6pm as they were preparing a potato field.

Both are understood to have suffered horrific injuries in the explosion.

The CEO of the Health and safety Authority, Martin O’Halloran, confirmed there has been an increase in the number of large tractor tyres exploding causing injury or death.

“We have noticed that there has been an increase in these type of accidents involving large agricultural tractor and industrial machinery tyres exploding when being inflated.

“They can explode catastrophically causing serious injury or fatality,” he said.

Tributes have been flowing in for the men who were described as “hard-working and decent” by all who knew them.

Mr Hegarty was a married father-of four who loved soccer and was a keen follower of Eircom League side Finn Harps for which his brother Paul once played and managed.

Family and friends were last night comforting his heartbroken wife Mary and children Jonathon, Amy, Louie and Ciara who are aged between 18 and 7.

Mr Woods was unmarried and didn’t have any children.

Mr Hegarty’s remains were taken to his home at Cloughfin, Ballindrait last night (SAT) for funeral mass at 11am on Monday.

Mr Woods’ funeral will take place later as some family have to travel from Australia.