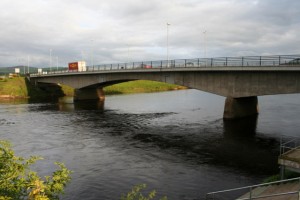 THE NORTH’S Regional Development Minister Danny Kennedy has been called on to show “real commitment” to the new A5 road’s project by proceeding with the building of the new bridge across the Finn at the Strabane-Lifford crossing.

SDLP MLA Joe Byrne made the call following a statement from Minister Kennedy on the recent meeting of the North/South Ministerial Council.

Mr Byrne said he beliieved the two governments must now show real intent towards the A5 project by building the bridge.

He added: “It would be seen as a positive signal and would reassure the public at this time.”

Mr Byrne concluded: “The time has come for DRD and the Department of Transport in the Republic to start construction on the bridge. This is a project which is badly needed for economic development in the North West.”