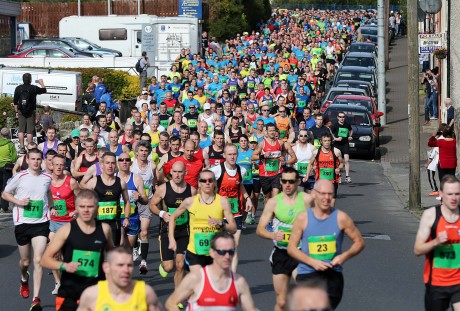 IT’S OFFICIAL! DONEGAL MARATHON WILL GO AHEAD AGAIN NEXT YEAR

The Donegal Marathon is to officially go ahead again next year.

After a hugely successful event this year, the Letterkenny-based race is to return again next year.

More than 850 runners and walkers took part in this year’s event and the committee are now hoping than more than 1,000 will take part in next year’s event.

The committee of the Donegal Marathon this week announced the return of the event for 2015 with a confirmed date of Sunday 23rd August, starting at 9.20am.

The event will again be based at Aura Letterkenny Leisure Centre with a route centred on Letterkenny and its surrounding hinterland.

The full marathon route is currently being finalised after feedback from the 2014 participants and will be confirmed in the coming weeks.

The half marathon route will remain the same and will again take in a loop of the Newmills area after exiting Letterkenny.

Those looking to register early and avail of early bird rates can do so at www.donegalmarathon.ie

The website will allow participants to register and pay their fee in advance of the actual race as well as advising on training programmes and how best to prepare for the event.

Brendan McDaid from Letterkenny Athletics Club and member of the Organising Committee said, “All round, last years event was a fantastic day with the support of the general public and in particular, all of the volunteers, resulting in a hugely successful event that everyone in Donegal should be proud of.

“We would like to now build on this event going into 2015 and increase the numbers taking part.

“The committee would like to thank the local community for their support in staging the 2014 event and look forward to working towards a successful event in 2015 with increased numbers of runners and walkers.