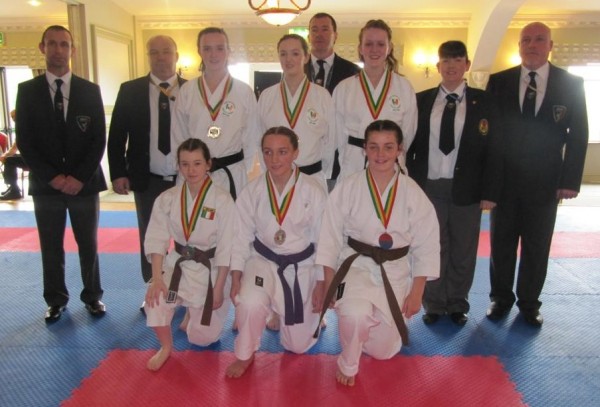 North West Shotokan Karate Club travelled south recently to compete at the Carlow International Open which was held on the 4th-5th October.

This annual karate tournament for children, cadets and seniors, always attracts high quality competitors from across Ireland and the UK, as well as competitors from the Continent and this year was no exception, with all events strongly contested.

With NWSKC Head Coach, Mandy McNulty as one of the tournament referees, the team of 11 students was led by assistant coaches Ciara Dullaghan and Emer Dullaghan.

The NWSKC students did not disappoint their coaches and supporters, bringing a fantastic 23 medals back to the north-west

The under-14 year old students were first to compete on Saturday, but despite strong performances in their kata and kumite by talented youngsters, Emma Ellis and Hollie Gallagher, they unfortunately finished outside the medal positions on this occasion, such was the quality of the competition.

They both gained valuable experience from testing their skills against others from Ireland and abroad.

The competition on Sunday saw a change of fortune for the team, as the more experienced students performed strongly in the highly competitive atmosphere.

In the Senior Ladies Team Kata event, sisters Ciara, Emer and Elaine Dullaghan proved too strong for all their rivals and their performance brought them gold medals.

This was followed by a strong showing by cadets, Laura Browne, Stephen John Carlin and Isobel Walsh whose team kata performance came a close second to a rival team from England and secured silver medals. T

he individual kata competitions saw more success for Elaine Dullaghan as she achieved her second gold medal of the day.

Stephen John Carlin emulated this with his own gold-medal winning kata. Indeed, as the day progressed, these two students gave fantastic displays of skill and determination and by the end of competition had each achieved four gold medals, with Stephen’s silver medal just pushing him ahead of Elaine in their respective individual tallies for the event.

Their team-mates added their own successes with James Burke winning a silver medal in his kata event while Laura Browne, Rebecca Burke and Ciara Dullaghan each achieved bronze in their various categories.

The Carlow International Open traditionally includes some challenge matches which pit a team selected to represent the host club against an international team, Carlow versus ‘The Rest of the World.’

On this occasion, NWSKC coach Mandy McNulty had the honour of coaching the ‘Rest of the World’ cadet team and both Stephen John Carlin and Elaine Dullaghan of the NWSKC were selected to compete.

Both students fought impressively against their opponents and contributed to their team’s victory, winning gold medals in the process. Ciara Dullaghan of NWSKC, was selected to fight for the Carlow team in the senior match and fought skilfully, but again the international team proved too strong for the Carlow challengers and Ciara received a runner-up medal.

The excitement and tension of the challenge matches continued into the afternoon as the kumite competition progressed.

There were mixed fortunes for NWSKC students. Laura Browne and Elaine Dullaghan fought through to win gold medals in their team kumite, as did Stephen John Carlin and James Burke.

Individual kumite events were fiercely contested and the NWSKC students fought skilfully, achieving some successes. Those who secured medals for individual kumite on this occasion were Stephen John Carlin (gold), Laura Browne (silver) and Sloan O’Donnell (silver and bronze).

The kumite events brought to an end another successful day for the club. The final medal tally was an impressive 12 gold, 7 silver and 4 bronze medals, with a total of 23 medals brought home to the north-west.

As always the medal tally tells only part of the story, however, and all the NWSKC students competed well, gained valuable competition experience and brought great credit to the club with their attitude and conduct.

Head Coach Sensei McNulty congratulated all the students who competed and thanked all the club supporters who made the journey to Carlow.