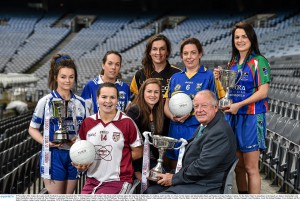 TERMON’S Geraldine McLaughlin was her club’s representative at Croke Park as the TESCO Homegrown All Ireland Club Championship Finals were launched.

The captain’s of all six competing clubs assembled in Dublin where they came face to face for the first time before meeting on the football field this weekend.

The TESCO Homegrown Senior club Championship Final will take place on Sunday at 2pm in Tuam Stadium, County Galway with deferred coverage being shown on TG4.

Termon face Mourneabbey from Cork – and both feature in the final for the first time in their history.

Both sides have come through some very tough encounters to reach this stage as Termon knocked out the 2012 champions, Donaghmoyne in the Ulster final and defeated the much fancied Kilkerrin Clonberne side in their semi final.

Mourneabbey accounted for The Banner in the Munster final and overcame Parnell’s of London in a tricky quarter final before a dramatic win over Mountmellick Sarsfields in their semi final.

Mourneabbey are backboned by the four O’Sullivan sisters including Ciara O’Sullivan who recently claimed her second All Star Award and her sister Doireann who is another of the Cork senior panelists.

Termon will rely very much on Geraldine McLaoughlin who has been in sensational form this year providing the vast majority of their scores.

The TESCO Homegrown Intermediate Club Championship Final will see Clonbur from Galway travel to Corrofin in Clare on Saturday where they will meet Castleisland Desmond’s from Kerry. Clonbur have been in great form and have the experienced Lorna Joyce who will spearhead their attack. Castleisland have plenty of experience on their side in the form of Kerry senior players Cáit Lynch, Aoife Lyons and Lorraine Scanlon.

In the TESCO Homegrown Junior Club Final Murroe Boher from Limerick will meet St. Ciaran’s of Roscommon at Ballinasloe on Saturday at 1:30pm.

Speaking about the TESCO Homegrown All Ireland Club Championship Finals LGFA President Pat Quill said ‘The TESCO Homegrown All Ireland Club Championships consistently produce the best matches of the year and certainly this year has been an exceptional one to date across all three grades. Winning with your county is something special but winning with your friends at club level is one of the greatest feelings that any player can have, I would like to wish all six clubs the very best of luck this weekend.”