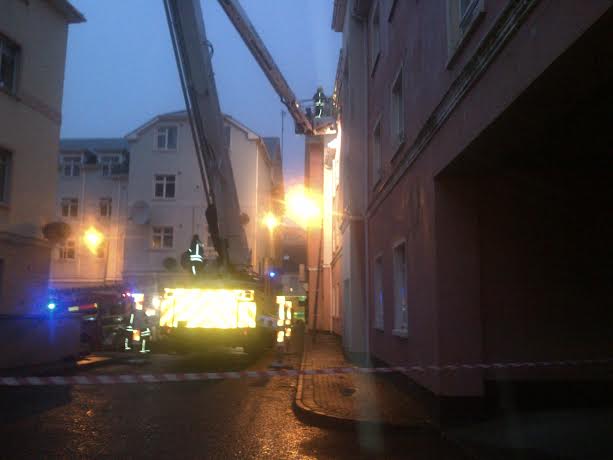 ARSON PROBE AS FIRE ESCAPE MAN ADMITS: ‘WE WERE LUCKY TO GET OUT’

GARDAÍ have launched an arson investigation after a flat fire which left a woman and her nephew being rescued by fire crews.

“Someone set our apartment building on fire,” said Martin Toye.

The incident happened yesterday evening at the Westside Apartments off Letterkenny’s Main Street.

The fire sent thick smoke over the area.

Martin and his auntie were taken to safety once fire crews had extinguished the flames.

It’s understood the garda investigation relates to a sofa and other furniture being set alight in an unoccupied flat.

Some residents had complained in recent days that the empty flat wasn’t secured properly.

“It seemed as though the whole building was alight at one stage,” said Martin.

“We were trapped inside and had to be rescued. It was a lucky escape as far as I’m concerned.”

Gardai, ambulance crews and fire personnel all attended the scene of the blaze.

Gardai later said that those inside the flat were fortunate the alarm had been raised when it was.

One resident said: “This is crazy.

“Those people could have been burned alive.

“People shouldn’t have to live in fear like that.”

Martin said he had yet to speak to Gardai.

“No, I haven’t spoken to them yet, but I would like to know what happened.”

ARSON PROBE AS FIRE ESCAPE MAN ADMITS: ‘WE WERE LUCKY TO GET OUT’ was last modified: November 26th, 2014 by John2