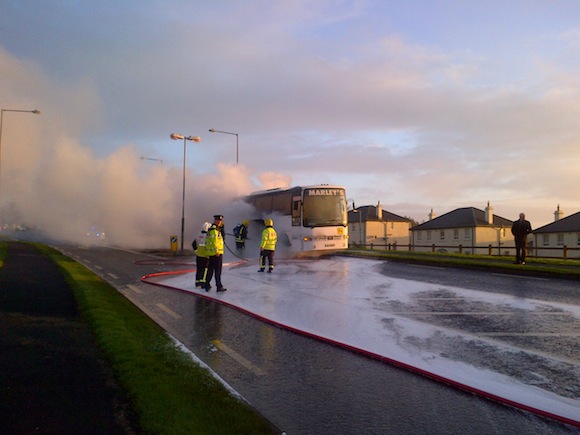 BREAKING NEWS: CHILDREN EVACUATED FROM SCHOOLBUS AFTER IT CATCHES FIRE

Gardai and the fire service at the scene of the bus fire. Pic by Donegal Daily.

Dozens of schoolchildren had to be evacuated from a schoolbus this morning after it caught fire.

The emergency services including fire tenders have rushed to the scene of the incident close to Mountaintop in Letterkenny.

The bus, which belongs to Marley’s coaches, caught fire just before 8.30am.

The children were rushed off the coach as flames caught hold of the bus.

It is not understood that any of the children were hurt in the blaze.

The children, who were coming from Creeslough to Loreto and St Eunan’s College, were taken to safety and then transferred to school on other buses.

Gardai and the emergency services are at the scene and are redirecting traffic.

It is not known how the bus caught fire.

“Smoke was flying out of he bus for a while. We first noticed it a we were coming up to Mountaintop and as we passed Kelly’s of Mountaintop, the bus driver pulled out and told us to get out that the bus was on fire,” said one of the St Eunan’s pupils.