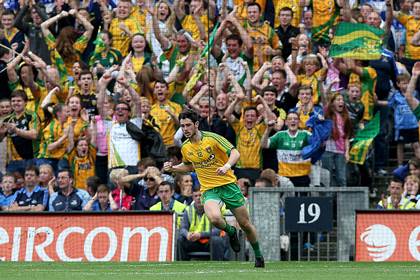 RYAN MCHUGH – “IF HE’S WILLING TO COMMIT, I’D SAY RORY WILL TAKE HIM BACK, HE’S NOT A BAD PLAYER”

Ryan McHugh wheels away in delight after scoring a crucial goal against Dublin in August.

Ryan McHugh believes new Donegal manager Rory Gallagher will take his brother Mark back into the county set-up if he’s willing to commit.

McHugh’s decision to leave the panel after the Division Two League Final defeat to Monaghan at Croke Park last April sent shockwaves around the country.

However, despite the loss of the influential McHugh, Donegal rallied and won the Ulster title and also reached the All-Ireland Final before narrowly losing out to Kerry.

Ryan McHugh emerged from the shadows of his brother and had a stunning season.

McHugh was crowned as the GPA Young player of the year last month.

His two goal blitz against Dublin in that All-Ireland semi-final will live long in the memory of Donegal fans.

However, with Mark McHugh appearing at a trial for club players at the weekend, it’s expected we’ll see him back in Donegal colours next year.

Ryan McHugh is hoping he does return, because he says himself and Patrick McBrearty could do with some company in the car on the way to training.

McHugh told The Irish News, “If he’s willing to commit then Rory will definitely give him his chance, he’s not a bad player.

“Myself and Patrick (McBrearty) wouldn’t mind a wee bit of company in the car in the New Year as well.

“Dad always tells me it’s a short career so you have to enjoy it. I cannot wait to get back playing and all the other boys will be the exact same.

“I love playing for my county, putting on that Donegal jersey and going out there. Everyone of the lads is the same. McKenna Cup is just around the corner and the League.

“I’ll enjoy the next few weeks but then it’s back to business.

RYAN MCHUGH – “IF HE’S WILLING TO COMMIT, I’D SAY RORY WILL TAKE HIM BACK, HE’S NOT A BAD PLAYER” was last modified: November 26th, 2014 by Mark Forker