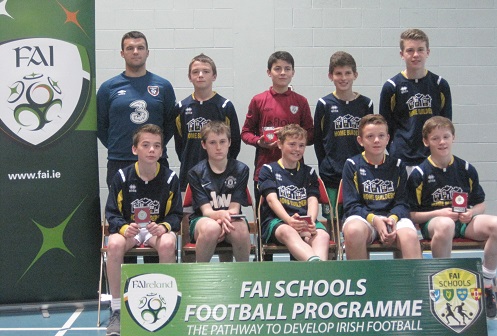 The cream of schools futsal in Ulster demonstrated their skills and ability with the conclusion of the FAI Post Primary Schools First Year Futsal Finals yesterday at the AURA Sports Centre, Letterkenny played host to the Ulster finale.

This event saw four regional finalists in each of the boys and girls sections as they competed to be crowned 2014 ULSTER FUTSAL CHAMPIONS.

The Ulster finale saw 82 players take to the courts with seven schools represented.

Donegal had Pobalscoil Ghaobh Dobhair (Boys) and St. Columba’s College, Stranorlar (Girls) while Inishowen were represented by Moville Community College in both categories.

After some mouth-watering ties in the competition, the girls from Moville under the stewardship of Seamus Gallagher captured the girls title while Sean Reilly’s crew from St. Patrick’s College, Cavan were victories in the boys section

Boys and girls of all sporting abilities were hoping to emulate the talents of former players such as Lionel Messi, Zico, Juninio, Kaka and Ronaldo as schools from Donegal, Inishowen, Monaghan and Cavan did battle for the prestigious title and a place in the National Finals which is due to take place after the Christmas break.

Futsal is said to be the world’s most played small sided sport with 25 million participants.

The game is praised for the number of star footballers it has nurtured over the years.

Therefore it’s not surprising to hear that Brazil is estimated to have more futsal players than football players.

The two disciplines complement each another brilliantly.

These legends of the football world have inspired youngsters to get involved and in doing so have increased the profile of futsal on an International scale.

Futsal is the official indoor version of “the beautiful game”. It’s a fantastic way for young players to develop and improve their football abilities in a highly paced environment.

The nature of the game creates an emphasis on improvisation, creativity, technique as well as ball control and passing in confined spaces.

The competition now in its fifth year has grown steadily with participation at an all time high.

The competition caters for boys and girls in first year.

Competitions commenced in October with schools progressing from County to Provincial levels, then onto the All Ireland series.

As part of the FAI Schools development programme, futsal is used as a way of introducing youngsters to the game of football and thus increasing grassroots participation within the sport.

Nearly 7,000 students have taken part in the FAI Schools futsal Initiative inside a three month period in Primary & Post Primary Schools throughout Ireland.

“The growth of the game within the schools structure can be attributed to the hard work being done at local level by the Development Officers as they play a vital role in the success of the initiative each year.

Congratulations to all participating teams on making it to the Ulster Finals.

The teams were extremely competitive and showed a high degree of skill on the ball.

We wish both Moville and St. Patrick’s the very best of luck in the National Finals in January.