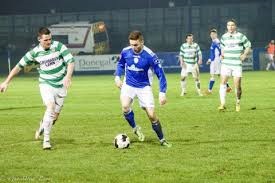 Sean McCarron could be on his way to Irish League champions Cliftonville.

Finn Harps striker Sean McCarron looks likely to be on his way out of Finn Park as Irish League champions Cliftonville line up a shock move for the talented striker.

McCarron scored eleven goals for Finn Harps under the tenure of Peter Hutton in the 2013 campaign, but last season he struggled the find the net regularly for Ollie Horgan’s side.

With Ruari Keating and Kevin McHugh leading the line up front, McCarron was often moved out to left to accommodate the pair.

McCarron was also unlucky with a number of injuries which kept him out for significant parts of last season.

However, despite his ordinary season Cliftonville manager Tommy Breslin is keen to acquire the services of McCarron in January.

It had been rumoured that Cliftonville were interested in McCarron in the summer, but Harps convinced McCarron to stay.

However, it now looks almost certain that McCarron will not be returning to Finn Park next season.

Institute and Coleraine are also rumoured to be keen on McCarron.

McCarron has divided opinion amongst Harps supporters over the last number of seasons.

There’s no doubting his ability and on his day he’s as good as anything in the league, but his lack of consistency coupled with injury problems have frustrated Harps fans.

The news will come as a blow though, it’s no secret Harps need more options in their attacking department and the loss of McCarron despite his indifferent season last year is a blow.