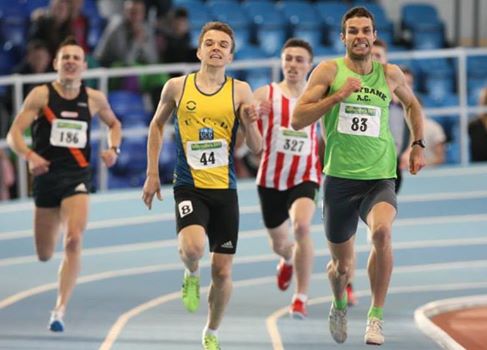 Karl Griffin pictured here in the yellow jersey, was crowned as the Irish Junior Athlete of the year.

Donegal athlete Karl Griffin was crowned the Junior Athlete of the Year at the National Athletic Awards ceremony in Dublin.

The Donegal Town native enjoyed a superb season and his performances reiterated why he’s considered one of the brightest prospects in current Irish athletics.

Griffin reached the 800m semi-finals at the World Junior Championships, running a personal best of 1.47.44.

That superb and accomplished performance singled out Griffin as a athlete that could make a serious impact if he keeps developing over the next few years.

With Mark English winning the overall athlete of the year it was a great night for Donegal athletics.

Well done to both Karl Griffin and Mark English on their wonderful achievements.