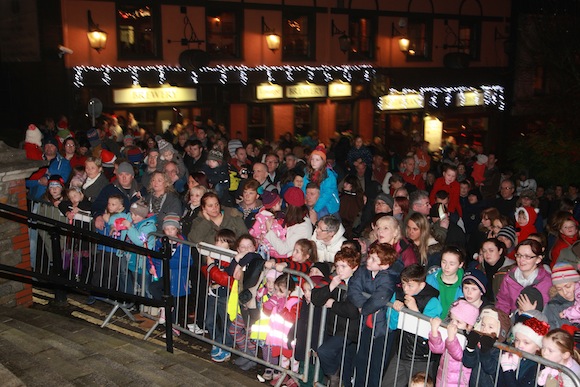 HUGE CROWDS TURN OUT AS LETTERKENNY OFFICIALLY LIGHTS UP CHRISTMAS

Some of the huge crowd which turned out in Letterkenny last night for the official switching on of the Christmas lights. PIc by Brian McDaid of Cristeph Studio.

Christmas officially started in Letterkenny last night as hundreds of people turned out in the town for the official switching on of the festive lights.

A perfect November evening put a smile on young and old faces alike as Christmas jumpers and Santa hats proved the order of the evening.

Leah MUllen gives us the thumbs-up with mum Bella just before she turned on the Christmas lights in Letterkenny.

Special guest on the night was Leah Mullen from Glenswilly who was officially chosen to switch on the lights after winning an art competition.

And just minutes after Leah switched on the lights, a very special guest was given a lift into Market Square by the local fire service.

He may be resting before his big trip but Santa looked fit and healthy and raring to deliver presents across Donegal on December 24th.

Compere Keith Fletcher did a great job as did chairman of the local municipal authority Cllr Michael McBride.

Santa arrives in style. Pic by Brian McDaid of the Cristeph Studio.

Many local businesses got into the spirit of things and handed out cookies and hot chocolate.

“I have been at the switching on of the lights for many years bu I think tonight was one of the best.

“There was such a family atmosphere and a feeling that the countdown to Christmas has now officially started.

“The people of Letterkenny should be very proud of themselves because they really put their best side out tonight,” he said.