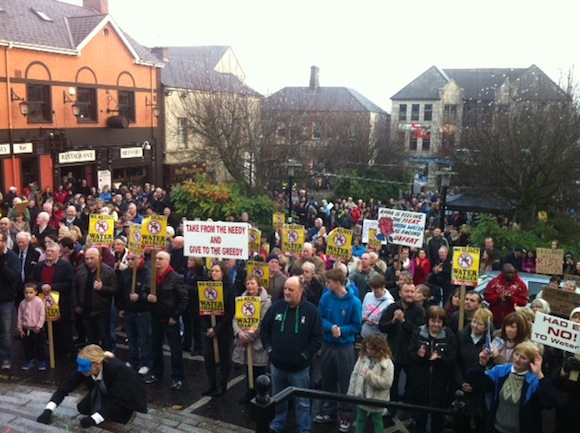 A crowd of more than 500 people gathered at Letterkenny’s Market Square today for a continuation of the protests against water charges.

Demonstrators decided not to march up the town’s Main Street out of respect for traders so as not to disrupt business.

The writing is on the wall for the Government according to this protestor. Pic Donegal Daily.

The march was one of five across Donegal today including Castlefin, Gaoth Dobhair, Carndonagh, Twin Towns and Letterkenny aimed at maintaining a stance against the Government’s plan to introduce water charges.

Organiser Michael Mooney told Donegal Daily that he was more than pleased with the turn-out.

“I thought there would be around five hundred people here and I think there’s slightly more than that.

“We did not want to disrupt traders during the Christmas period and that is why we have not marched up the town.

“The main aim of today’s gathering is to keep up the momentum against Irish Water and to gather names for the major rally which takes place in Dublin on December 10th next,” he said.

Many carried placards calling for Enda Kenny’s resignation throughout the gathering.

A number of people addressed the crowd including local councillors Gerry McMonagle and John O’Donnell.