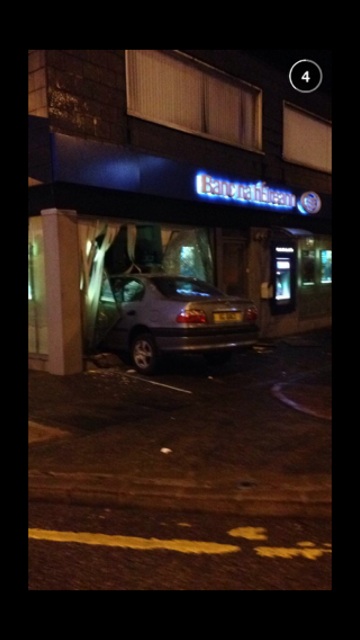 A driver had a lucky escape last night when his car crashed into a bank.

The car crashed into the bank in Falcarragh this morning. Pic by Donegal Daily.

The incident happened in the early hours of this morning when a car crashed into the Bank of Ireland on Main Street in Falcarragh.

Our pictures show the car crashed into the bank and the damage caused to the building after the car was taken away earlier today.

It is not believed that anybody was seriously hurt in the accident.

The alarm company, staff from the bank and the Gardai were at the scene overnight.

The Bank of Ireland is the last remaining in the town after the AIB closed its doors during the summer of 2013.

It is not known if the bank will be open tomorrow because of the damage.

The damage caused to the bank this morning. Pic Donegal Daily