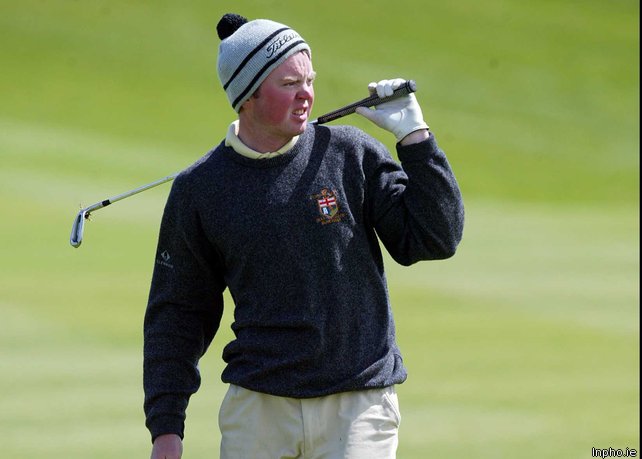 The final alliance competition of 2014 was played for in Rosapenna (Old Tom Morris) GC. on Saturday 29th November and what a day it was for golf with sunshine,very little wind and not a sighting of waterproofs.

The conditions were so benign that almost all of the sixty odd competitors had at least 30 points plus each.

This competition, the St. Patrick’s Links Plate, is second only to the Captain’s prize in terms of prestige. It commemorates the “Links” which was once owned by the Walsh family of Carrigart and when the Links was sold, the St. Patricks Plate was presented so that the course, which was the last one designed by legendary golf architect Eddie Hackett, would not be forgotten. It was none other than Jack Nicholas the famous golfer who presented the trophy on behalf of the Walsh family to the Alliance for perpetual competition, as they were the last organised group to play over the St.Patricks Links. It has been competed for annually since 2005. The person whose name will be inscribed on the plate this year is Eugene Corry, Newtownstewart Golf Club, and what a popular winner he proved to be with the long time alliance member doing it in style .

The land on which St. Patrick’s Links was built is an extension of the land on which the Old Tom Morris course was built with the 14th hole running alongside the boundary line .The significance of this is that Eugene had an exceedingly modest return of 16 points on the front nine but then, when he started on the inward nine, he just blew the opposition away as the ten handicapper proceeded to shoot one under par for his back nine . He had pars all the way with a birdie thrown in for good measure at the 15th. However, if things went well for the winner , then it was the opposite for the runner up Eddie McHugh. Playing off 16, Eddie had 20 points for the first nine but then, as he faced “the Links” which can be seen in outline on the back nine, the golfing gods of fate turned against him and conspired to thwart Eddie as he blanked two holes and only accumulated another 18 points so that he finished two points in arrears of this year’s winner of the Plate.

As usual, the race for the gross prizes’ was as keenly as ever fought for. Brian McElhinney, recovering from his bad back injury and making his first appearance of the year in the Alliance, soon settled into his stride and covered the outward nine with seven pars and two birdies. Eddie McCormick was hot in pursuit though and, despite a dropped stroke at the first, he quickly steadied himself and recorded birdies at the par four 5th and par five 8th to leave himself just one shot behind. Brian’s birdies, incidentally, came at the last two holes on front nine. As they turned for home, Eddie dropped strokes at the 10th and 12th whilst Brian, having parred the 10th, dropped a stroke at the 12th also and another shot went at 14th. Eddie had a birdie three at the par four 13th and thus the two of them were now level after fourteen holes. With the tension mounting as they vied with each other for victory, they then both parred 15th, birdied the par five 16th and matched each other with birdies at the par three 17th., Brian eventually came out on top as he birdied the 18th while Eddie had a bogey five. Spare a thought for former Rosapenna GC. member John G. McBride, now playing out of Portsalon GC, who parred every hole home from the 8th but his dropped shots at the 4th and 7th had him finishing in third place with a splendidly crafted 73 gross, which is but two over par.

It was great to see Eamonn Davis continuing to recover his good health. Having finished fourth in Ballyliffin, this time the putter did not work as well but he is again in the prizewinners having secured a two .

In the Golfer of the Season nett section, the leading positions see little change from the last competition with the Mc Gettigan brothers from Strabane GC. continuing to lead the way and the only movers were Brian McCarroll from North West GC. moving up to third closely followed by Eddie Mc Hugh StrabaneGC. and Padraig Mac Lochlain of North West GC..

In the gross section, Finnian O’Doherty, Letterkenny GC., has consolidated his leading place on 28 with Noel Callan, Faughan Valley GC., second on 22 while Seamus McMonagle Dunfanaghy GC. and John G McBride Portsalon GC. are both on 20. This is the most keenly fought gross section for many years.

The Alliance now goes into hibernation in anticipation of very inclement and decidedly non- golfing type weather over December and January.

Next competition to be played at Portsalon GC. on 7th February 2015.