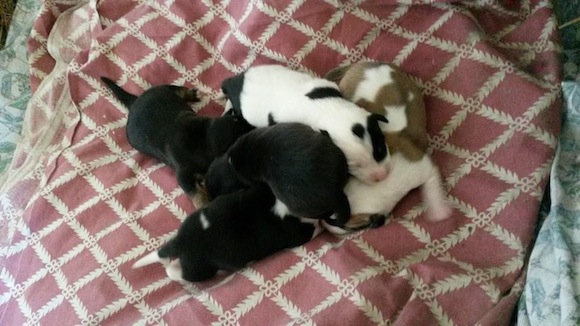 OUTRAGE AS PREGNANT DOG DUMPED TO DIE AT REMOTE MOUNTAIN

The pups which were born juts hours after the dog was dumped by its owner.

A heartless dog-owner dumped a heavily pregnant dog to die at the side of a mountain.

Animals In Need (AIN) volunteers were shocked to be called out to rescue near Killybegs at the weekend.

Lassie was dumped up a mountain to give birth

A local man first noticed the dog there on Thursday last week whilst taking his own dog for a walk off the beaten track.

This Good Samaritan began to bring the dog food and rang all the farmers in the area to see if she was a lost sheepdog, but to no avail.

However, when he returned on Saturday he was astounded to find she had given birth to five pups.

Animals In Need responded to the call for help immediately and went out to find the dog and her pups, who had taken refuge in a forested area on the mountainside.

The rescue volunteers found a very friendly though disheveled and matted mother dog waiting for them, with an old rope still dangling from her neck, along with her helpless pups.

Named Lassie by her rescuers, the dog had sheltered her pups from the elements as best she could, but as this was an emergency situation, although AIN had absolutely no foster places available, the AIN volunteers had to take this vulnerable family to a safe place.

An Animals In Need spokesperson said ‘That someone could be so cruel as to leave a pregnant dog up a deserted mountain to give birth in December defies belief and the spirit of Christmas. However, Animals In Need couldn’t say there’s no room at the inn, so even though all the dog foster places were full, we had to rescue these dogs who had no chance of survival on their own and they are in fact now being looked after by one of our cat fosterers.’

Animals In Need doesn’t have a shelter or a holding place so all the animals have to be looked after by unpaid, voluntary fosterers in their own homes until a permanent home can be found for them.

The spokesperson explained ‘The situation with abandoned animals and dogs dumped in the Letterkenny Pound has gotten completely out of hand in Donegal over the past few years with almost 800 animals rescued by Animals In Need in the past year, 535 of them being dogs, mostly from the Pound but also we’re seeing cases of heartless abandonment such as this.’

The good news is Lassie and her pups are now safe, cosy and warm, having had a lucky escape from the very different fate that awaited them on that frozen mountainside and when the pups are old enough, they will all be found good homes as will their mum.

If you would like to donate towards the care Lassie and her pups will need, please text the word ‘KITTEN’ to 50300 to donate €2 or donations can be made via PayPal on Facebook or the website at http://www.animalsinneeddonegal.com