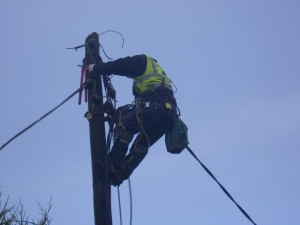 PUBLIC WARNED AFTER ESB POLES BEGIN TO ROT ACROSS COUNTY

The public has been warned to stay away from ESB poles across Donegal after many poles started to decay.

Workers have been warned to avoid climbing ESB poles.

The ESB has confirmed a group has been set up to examine the poles amidst concerns that some may break.

Workers have been told to avoid climbing the poles manually and to use hydraulic lifts instead.

It is understood that up to 5% of the poles imported into Ireland from overseas between 1996 and 2008, some 120,000 poles across the country, may be affected.

Local county councillor Seamus O Domhnaill has been in contact with the ESB on the matter.

He told Donegal Daily that the ESB must set up a public meeting to inform the public of the dangers posed by the poles.

Councillor O Domhnaill said the full details of the danger posed by the decaying poles have not been revealed yet.

“I have spoken to the ESB and they have described the situation as “an unexpected phenomenon which they are actively investigating.”

“I have heard anecdotal evidence that there have been a number of incidents involving workers having near misses.

“But there is also a danger to the public passing by these poles.

“And although people should not be erecting Christmas lights near these poles, this could happen coming up to the festive season,” he said.