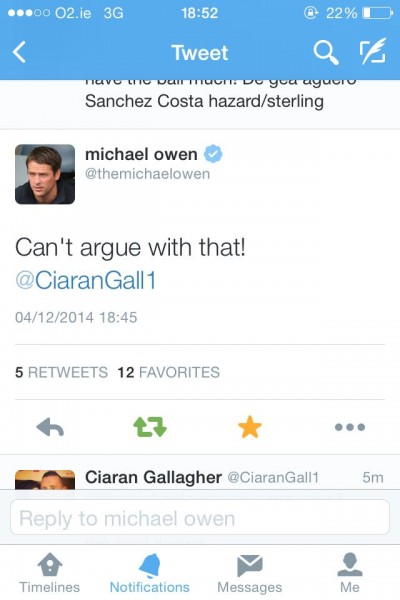 Former Liverpool and Real Madrid striker Michael Owen has agreed with Finn Harps goalkeeper Ciaran Gallagher’s assessment that he is a better goalkeeper than Simon Mignolet.

Gallagher who recently signed back for Finn Harps after a brief spell at bitter rivals Derry City made the claim on social networking site Twitter.

Mignolet has come in for some severe criticism due to his lacklustre performances over the last number of months.

The Finn Harps No.1 is a lifelong Liverpool supporter, and like many of the club’s supporters is growing impatient with the Belgian shot-stopper poor performances.

Gallagher claims that the former European Footballer of the year responded to a tweet in which he proclaimed he was a better keeper than Simon Mignolet.

Owen tweets Gallagher back saying ‘Can’t argue with that @ciarangall1.’

Gallagher took to Facebook and posted a screenshot of the tweet (pictured above) with a caption that read.

‘His response when I tweeted saying I’m a better keeper than Mignolet! He knows the Craic’.

However, the original tweet by Gallagher is nowhere to be seen and Owen looks like he was just responding to Gallagher’s five-a-side team selection.

It was a nice try from Gallagher, however he could be in hot water with Ollie Horgan.

Gallagher makes no secret of the fact he’s attempting to engineer a move away from Finn Park to Anfield in January.

If the talented and affable shot-stopper doesn’t make the move to Liverpool in January, he’s probably earned himself extra running in pre-season next month. 🙂