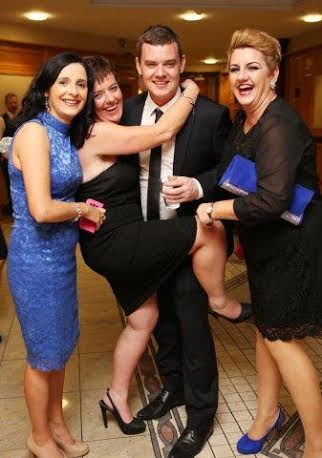 DANNY’S NIGHT OF THE STARS RAISES €20,000 FOR DONEGAL CHARITIES

The craic was ninety with Danny O’Carroll last night.

It’s official! Danny O’Carroll’s inaugural Charity Christmas Night has raised a whopping €20,000 for The Autism Unit at Lurgybrack School and The Paediatric Unit at Letterkenny Hospital.

The event, which was MC’d by comedian Gene Fitzpatrick, was buzzing with over 500 people attending at the Mount Errigal Hotel.

Reacting to the news, Danny said he was absolutely stunned by people’s generosity.

“I am absolutely delighted to host this event in Letterkenny and I would like to thank all the local businesses and people who have supported me tonight.

“It is such a privilege for me in my position to be able to give back to my community and raise funds which are desperately needed for The Autism Unit in Lurghy Brack School and The Paediatric Unit in Letterkenny Hospital”.

Guests were welcomed by their hosts Danny and Amanda O’Carroll and served their meals by Mrs Browns Boys stars Paddy Houlihan AKA Dermo Brown, Pat “Pepsi” Shields AKA Mark Brown, Rory Cowan AKA Rory, and Dermot “Bugsy” O’Neill AKA Grandad.

Entertainment on the night included Static Movement, the hilarious Foyle Follies, the incredibly talented Ryan Sheridan and John Gallagher and the Boxtie Band. The venue was beautifully decorated by Elegant Functions.

Raffle items were kindly donated by local Letterkenny businesses who gave so generously to the night. Included in the raffle prizes were two 50” Panasonic LED TV , two 40” Samsung LED TV , two 32” Panasonic LED TV, bundle of Smyths toys including XBOX and five games and a racing bike, overnight stay for two at the five star Marker Hotel and The Powerscourt Hotel, Iphone and IPAD and many more !!!!