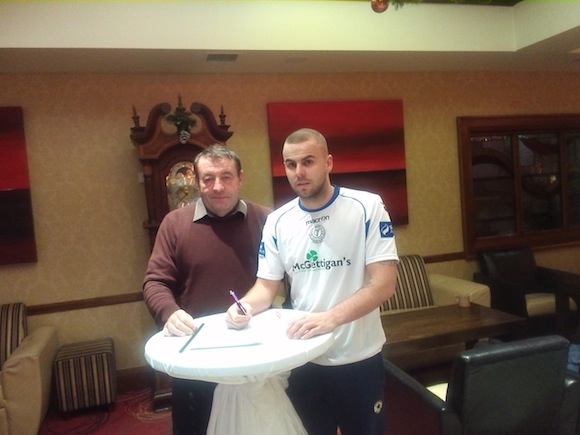 Finn Harps have announced that Damien McNulty has re-signed for the 2015 season.

The former Limavady and Coleraine defender was regarded as one of Harps most consistent performers last season, including sterling displays during a cup campaign which culminated in the club reaching its first FAI Cup semi-final since 1999.

Damien was voted by supporters as the young player of the year and was also selected on the first division team of the year.

Damien said “I am delighted to have put pen to paper and committed for the season ahead. I felt last year that we did a lot of things right on and off the park and the squad bought into the professional preparation which has been instilled in the club. If we can add one or two to last year’s squad I think we can push on and put ourselves in the promotion mix. I am really looking forward to meeting up with the rest of the squad in January and get started on our pre-season training regime. “

“Our supporters were fantastic last year and are one of the reasons I have re-signed. I want to thank them for all the travelling and vocal support they gave us even when we were going through a sticky patch. I think they can see the commitment we have been putting in and with a bit of luck we’ll give them something to be proud of in 2014”, he said.

Finn Harps manager Ollie Horgan said “I am delighted Damien is back on board because he one of those players that gives you the consistency and winning mentality required to compete at senior level. He was terrific for us last season and put in a string of outstanding performances. You need players who have that drive and will to win and Damien brings that to the training pitch and dressing room. It didn’t surprise me that other clubs were interested in signing him but it’s great that Damien is committed to what we are looking to achieve at Finn Park”.