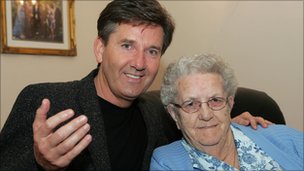 Daniel O’Donnell has kept a promise to the hospital where his mother died – by playing a fundraising concert for them.

The millionaire singer was due to play a concert in aid of Dungloe Community Hospital last May.

But the day the concert was due to take place, his beloved mum Julia passed away at the facility aged 94.

Now the big-hearted singer has announced that he will play the concert on May 17th, 2015 – almost a year to the day after his mum passed away on May18th this year.

Daniel has announced that ‘A Day In Dungloe With Daniel O’Donnell and Other Artistes’ will be a huge celebration of local music.

This concert, during which Daniel has promised to play a two hours set for fans, will be the only concert date to be performed by Daniel during his 18 month break.

Tickets for the concert, which is set to see fans come from across the globe, will go on sale next Saturday, December 13th.

Daniel said he could not thank the staff of Dungloe Community Hospital enough for the care and compassion they gave his mum in her final days.

Daniel and wife Majella are to return to their home in Kincasslagh for Christmas.

However the singer admitted that it will not be the same celebrating his first festive season without his mum.