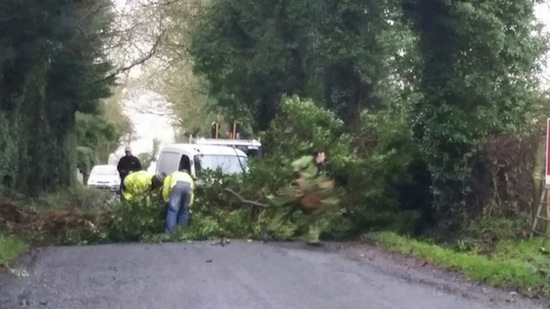 Workmen remove a fallen tree between Castlefin and Raphoe in today’s heavy winds.

Donegal County Council has this evening issued an urgent weather warning to the public on foot of the Orange Status Weather Warning issued by Met Eireann.

As well as severe winds, the council is warning of extremely high tides along the Donegal coastline.

There are already trees and phonewires down across the county as our picture above shows.

They council says staff are on standby to respond to any emergencies which may arise tonight.

Met Eireann has issued an Orange Status Weather Warning for Donegal and other counties forecasting  windspeeds of 45 to 65 km/hr with gusts of 70 to 100 km/hr early tonight.

It will become very windy or stormy from midnight onwards with westerly winds reaching mean speeds of 50 to 70 km/hr and gusting to speeds of 100 to 130 km/hr.

They are advising that there will be a period of high astronomical Spring Tides tomorrow which when combined with storm wave conditions are likely to result in sea levels exceeding Highest Astronomical Tide (HAT) in coastal areas including Donegal.

They say this will increase the risk of flooding in coastal areas.

Sea levels during this period are expected to be highest during the morning of Wednesday 10th December 2014, especially in and around the predicted times of High Water.

Donegal County Council has urged the public to exercise caution particularly in areas adjacent to the coastline and areas which are susceptible to coastal flooding.

The Council will monitor conditions and staff are on standby to respond to emergency call outs.