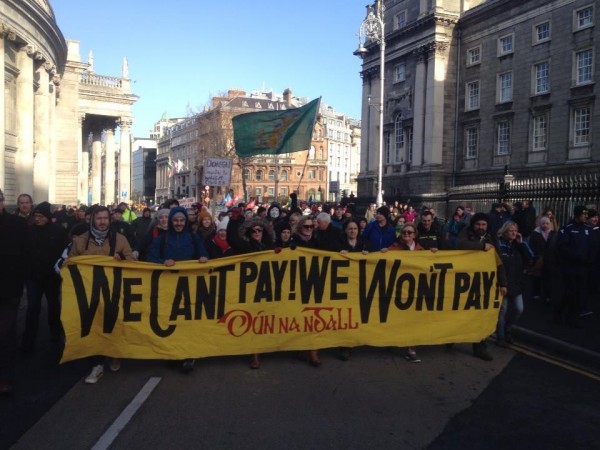 The Independent county councillor is in Dublin to take part in the national demonstration against the water charges the Government are attempting to implement.

Mac Giolla Easbuig has called for people to stand firm on the Right2Water protests, but firmly believes that now is also the perfect opportunity for Trade Unions to call a general strike.

“I’d be hoping that Trade Union leaders would use this opportunity to call a general strike.

“It’s a great opportunity for them to do it, and I’m calling on them to use their power to support the boycott.

Mac Giolla Easbuig is amongst a large group from Donegal attending the demonstration in Dublin this afternoon.

He’s calling on people to stand firm over the issue, and believes if people continue to stand firm and support the boycott then the Government will have no other option but to scrap the water charges legislation.

“I’d appeal to people not attending the demonstration today to stand firm over these unjust charges.

“We’re winning, the campaign is getting stronger and there is a real anger among people.

“We need to stick together and continue to send a clear message to the Government that these charges will not be tolerated and accepted by the Irish people.

Mac Giolla Easbuig also said that for many protestors on his bus, today was the first time they had gone to a protest rally.

He revealed that they had paid the household charge and property tax but that the water charges were the straw that broke the camels back.

“We have people on this bus attending a protest rally for the first time.

“They paid the property tax and the household charge, now they weren’t happy about it but they accepted it and paid it.

“But since the Government introduced their plans to charge for the basic human right of using water they simply said enough is enough.

“That was the straw that broke the camels back for them, and they believe that if the water charges are passed they will eventually be sold and privatised.”