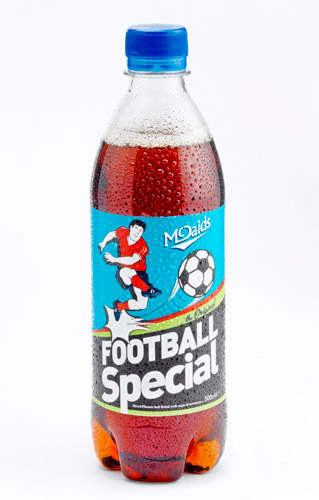 FEARS FOR FUTURE OF ‘FOOTBALL SPECIAL’ AS CREDITORS MEETING CALLED

THERE are fears for the future of Donegal’s most famous soft drink – Football Special – after a creditors’ meeting was set for later this month.

The family company which produces the fruity fizzy drink, James McDaid & Sons Limited, has formally notified its creditors of the meeting.

The company has expanded its distribution area in the past couple of years – and has been running Christmas giveaway competitions on its social media sites in recent days, with a huge response from Donegal people living abroad.

There was shock in May this year when staff in Ramelton were called to a meeting and told  production was being moved to Ballymoney, Co Antrim, home of the Maine brand.

They took over over the Football Special and Banana flavoured drinks synonymous with Edward McDaid and his firm.

The drink called “Football Cup” was designed to “fill the cup” with an exciting non-alcoholic beverage. Later the name was changed to Football Special but the unique taste stayed the same.