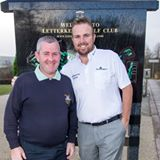 Duffy told Donegal Daily, “I would like to thank outgoing captain Tom Mc Donagh for choosing me as his vice-captain for 2014 and I am looking forward to my role as Club Captain for 2015.

“I have had the privilege of working voluntarily under the past number of captains of Letterkenny Golf Club and I hope to reiterate their philosophy of working as hard [and as many hours] as possible to develop this club further both on and off the course.

“Those Captain’s and their committees have been vibrant, foreseeing and unceasing in their ideals of making the course one of the best parkland courses not only in Donegal but in the country, as proven by our selection to the top one hundred courses in Ireland.

“I hope to follow in such auspicious footsteps and retain the highest standard of club stewardship throughout the year, for which I am deeply honoured, and look forward to working with the 2015 mens’, ladies’ and parent committees.

All members would like to wish Gerard and his committee every success in 2015.