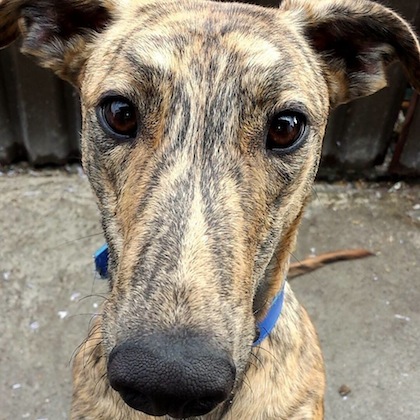 One of the mising pets, Otto, which was found safe after being stolen from its Letterkenny home.

Christmas has come early for one Donegal family after their three stolen pet greyhounds were found safe and well.

The McKeever family were left devastated on Saturday morning after they awoke to find their home broken into and their beloved dogs taken.

The gate at the rear of their home in Letterkenny had been twisted and the three pets taken from sheds.

Dad John McKeever said his family were left heartbroken as they had raised the two pups from a litter of 13 which were born last January.

“We heard barking in the middle of the night but didn’t think much of it.

“But when we woke up we knew the gate had been twisted off and the dogs were gone.

“We were just gutted that anybody would do such a thing,” said John.

John revealed the whoever stole the dogs from his home at Ballymacool were prepared as they had their own leads and did not steal any of the dog’s leads which were hanging in the sheds.

The family including John’s wife Noreen and children Grainne, 19, ad Ronan, 21, immediately put the word out by social media about the missing pets.

John said “I would have always been skeptical about social media and Facebook but I have seen first-hand the power of it.

“We had everyone looking for the dogs and it wasn’t long before we had people making a number of possible sightings,” he said.

And to the family’s delight just before 6pm on Saturday evening, a young boy called to the house and said he had found the dogs straying on the street.

John said he would not like to think what would have happened to the family’s pets if they had not launched a search for the dogs named Tiger, Otto and Buddy.

“The mother dog Tiger is old so they might have just dumped her or shot her and the two pups would probably have been used for lurching.

“We’re just so thankful to have them back because we have had them since they were born.

“The next time the kids are on Facebook all day, I won’t be giving out too much,” laughed John.