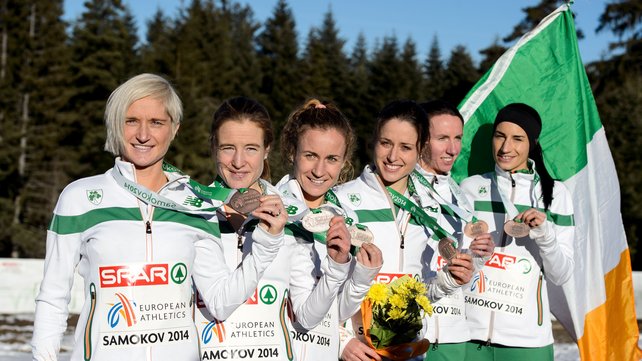 The total score meant the Irish team finished one point ahead of the French team who placed fourth on 88 points, earning Ireland their seventh team medal at these championships since they began in 1994.

Irish team captain and Donegal runner Ann-Marie McGlynn said “I am thrilled, I knew coming in that we had a chance. I am just so delighted for the girl’s, we have really gelled as a team and this is just brilliant to get a team medal, I am delighted.”

At the front of the field Britton was aiming for a third European cross country title in the space of four years having won the title in 2011 and 2012. Britton was always to the fore in a fast paced race as the Great Britain & NI athletes Kate Avery and Gemma Steel battled it out for the individual title with Steel coming out the victor. Track specialist Bahta of Sweden swept through the field on the final lap to place third.

Despite her best efforts Britton finished in sixth place in a time of 28.59, one place behind last year’s champion Sophie Duarte of France. Britton said “On the last lap, with the other two girls away (Steel & Avery), it was a medal race and I really just wanted to get that medal. I tried really hard but my legs just weren’t going. I battled all the way as I knew every place mattered and I would be devastated if I had of lost it for the girl’s.”

Commenting on the team bronze Britton said “We knew coming in that we had a chance of a medal, all the girl’s on the team are real cross country runners. So we knew that we would all battle all the way around the course, no matter what the conditions were.”

Sara Treacy ran a very courageous race storming through the field to finish in twelfth place. Treacy started off cautiously running in 47th place after the first lap. As the race unfolded Treacy upped her pace and powered to a fine twelfth place finish. Michelle Finn was another of those having a breakthrough race as she impressed crossing the line in 23rd place in a time of 30.09. Team captain McGlynn was in next as she gave everything to cross the line in 46th place followed closely by team mate Siobhan O’ Doherty in 47th. Laura Crowe who was unwell on the morning of the race finished in 53rd to round out the Irish team placings.