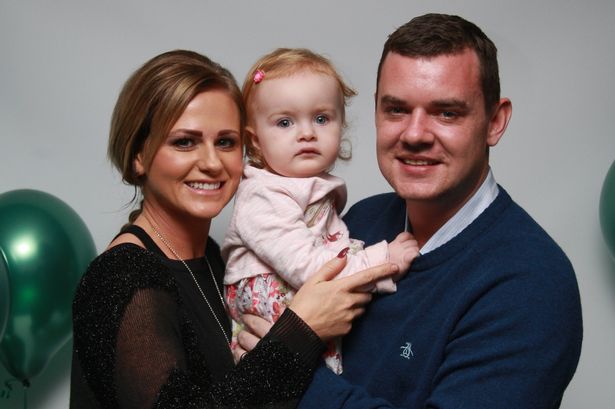 Danny, his wife and actress Amanda and little Katie 12 days ago

ACTOR Danny O’Carroll has called for Government help for families of children suffering from a rare illness following the funeral today of a little girl who he met just two weeks ago.

Katie Rodgers, almost 3, was laid to rest after the Mass today on Arranmore. She died at Temple Street Hospital after a battle with Mitochondrial Disease.

Said Danny: “She was a little princess and Amanda and I were shocked to hear of her death at the weekend.

“It’s crazy to think I was with her just two weeks ago in Letterkenny and she took a bit of a shine to me and was hugging me and playing with me.

“To look at her you wouldn’t think anything was wrong with her. These parents are essentially playing a waiting game and it’s not fair that there is not even hope for these families.

“The Government says there is not enough children here with mitochondrial disease to build research centres but when I was there two weeks ago there was five or six, that was in Donegal alone.

“How many kids do they need to have it before they take action?”

Parents want more money to be invested into research.

Gina Grant, a nurse whose own child as the illness, said of Katie: “She had a few seizure episodes on Thursday so her parents brought her to Temple Street for tests and she just never recovered.

“It’s hard to think just a couple of weeks ago she was laughing and smiling. She was so healthy and fit, interacting.”

Under 35s should be excluded from next...