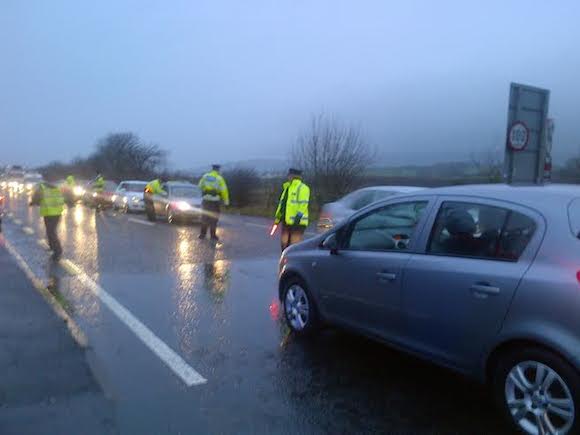 QUICK-thinking Gardaí have arrested a car thief after a dramatic chase.

The incident in Inishowen took place just an hour before Gardaí and the PSNI carried out a cross-Border check for drink-drivers.

The motorist was performing doughnuts in the centre of the busy Letterkenny to Derry road, forcing other road users to stop.

A chase began and Gardaí managed to arrest the driver.

The car had been reported stolen overnight in Letterkenny.

The suspect is in Garda custody being questioned about dangerous driving.

One shocked eye-witness told Donegal Daily: “It was complete madness; I’ve never seen anything like that before – the man was going crazy in the middle of the road.

“He could have killed someone, there’s no doubt about that. It was crazy.”

Meanwhile the PSNI and Gardaí carried out breath tests on motorists at Bridgend as part of the crackdown on dangerous driving his Christmas.

However Traffic Corps Inpsector Michael Harrison said they were also focusing on a number of serious issues which are causing deaths and serious injuries on our roads.

“There is still a serious issue with motorists not wearing seat belts and it is something we are struggling to understand,” said Inspector Harrison.

“We have had an incident in recent days were a motorist has suffered life-changing injuries because he wasn’t wearing a seat belt.

“There is a growing issue with distraction driving, motorists driving while using mobile phones and driving whilst tired is a huge factor in many incidents.

“With our colleagues in the PSNI we are determined to help make our roads safer for all of us, not just at Christmas but all year round.”