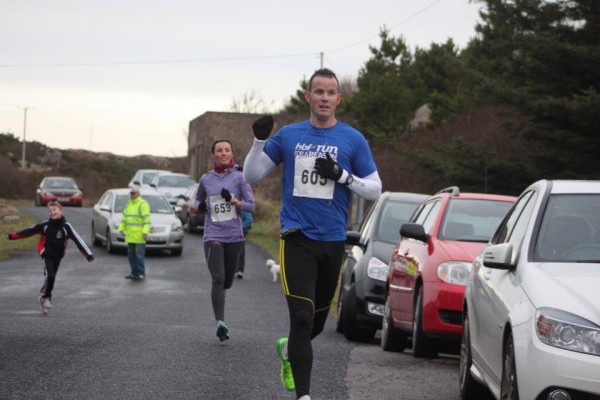 Proud moment for last year’s winner Aidan Mills as he crosses the line. Aidan is the younger brother of the late Darren Mills who passed away in 2010.

Another huge crowd is expected to participate in the 3rd Annual Darren Mills Memorial run on Boxing day.

It’s that time of the year again when everybody around the Kincasslagh area dusts down the running and walking shoes to try and emulate Ciaran Doherty, Pat Anthony and all the other great athletes from the locality at the 3rd Annual Darren Mills Memorial Run.

Following on from hugely successful events in 2012 and 2013, the organising committee are again hoping that the local community – and beyond – comes out in force to commemorate the life of Darren who tragically lost his life back in 2010.

In addition to remembering Darren, the event allows for much needed funds to be gathered for two deserving local charities.

This year’s beneficiaries will be the school where Darren received his childhood education, Belcruit National School, and the North West Cancer Group who facilitate the provision of a subsidised airfare for family members of people who are having to travel to Dublin to undergo treatment for cancer and related problems.

Since the first event on Boxing Day 2012, over €5000 has been handed over to local charities, namely the Dungloe Hospital Patient’s Comfort Fund, the Donegal Hospice and the Day-Centre at the Angle in Dungloe.

Entry on the day is by donation to ensure the event is open and affordable to all-comers.

This year to facilitate those with younger children or who feel they may not manage the full 6k route, this year a shorter 1.25k walking route which follows a loop around by St.Mary’s Chapel and Belcruit N.S has been added.

All those who donate/register on the day will be entered into the mega prize draw which will be held after the run/walk in Carey’s Viking House.

Registration will take place in the Viking from 1pm with the run/walk starting at 2:30pm.

So get those running/walking shoes dusted down and come join in the fun with all the family on Boxing Day.