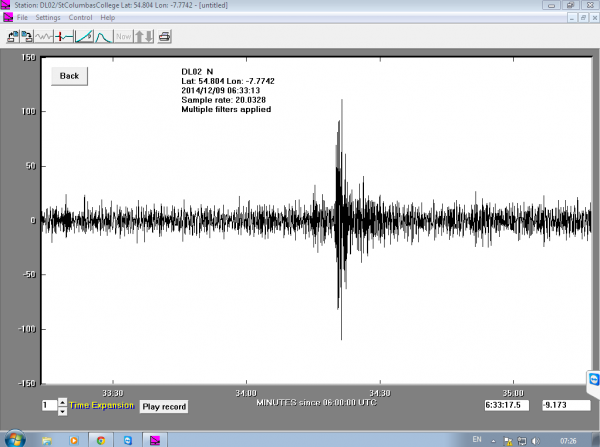 EXCLUSIVE: A physics teacher has exclusively revealed to Donegal Daily that a mini earthquake has been recorded in Donegal in recent days.

Brendan O’Donoghue, a physic’s teacher at St Columba’s College, Stranorlar was stunned where he discovered that a mini earthquake had taken place in Donegal.

A seismometer placed in the school’s physics lab registered the shaking and the signal was recorded on the PC’s hard drive – but nobody seems to have felt it.

The small tremor shook the ground in St Columba’s College, Stranorlar at 6:34am on Tuesday, December 9th.

O’Donoghue told Donegal Daily, “Our seismometer records events from all over the world, but unless they are big enough to see on the screen you can miss them.

The Geophysics section of the Dublin Institute for Advanced Studies sent notification to St Columba’s eight days after the event to corroborate the signal they had obtained from the IDGL seismometer buried on Inch Island.

Signals from several stations are needed to plot epicentres and magnitudes accurately.

Sure enough, the data was there, buried, too, this time in the background noise of the Earth’s many small vibrations due to weather and waves, traffic and people.

“It was fortunate the event was so early. An hour or two later and the day’s normal activity would produce enough noise to drown out such a weak signal”, said O’Donoghue.

The event seems to have been centred in the vicinity of Milford / Ramelton / Rathmullan, and to have had a modest magnitude of 0.6.

“We do get small earthquakes here from time to time. The Earth’s crust in Northern Europe is still rising after the last ice age, when the weight of the ice would have pressed down on the crust.

“The earthquakes are generally small as the energy released is thousands to millions of times smaller than those released by colliding plates elsewhere on the Earth’s surface.