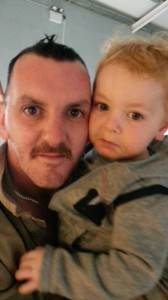 A MUFF family of a man missing for three days had been found alive and well.

Michael Curran had gone missing from a brain injury treatment hospital on Merseyside in England.

His heartbroken family in the Co Donegal village had spent the past 72 hours searching for him.

They had also issued an alert in Derry in case Michael had attempted to travel home.

But today there was brilliant news for the Curran family.

A short time ago his brother Declan said: “I just want to let everyone know I’ve found Michael in Liverpool about half an hour ago alive!

“I want to thank everybody sharing the appeal online and on social media.

“It was through Facebook that I found out the last place he was seen which is the area where I found him today. Cheers everyone!”